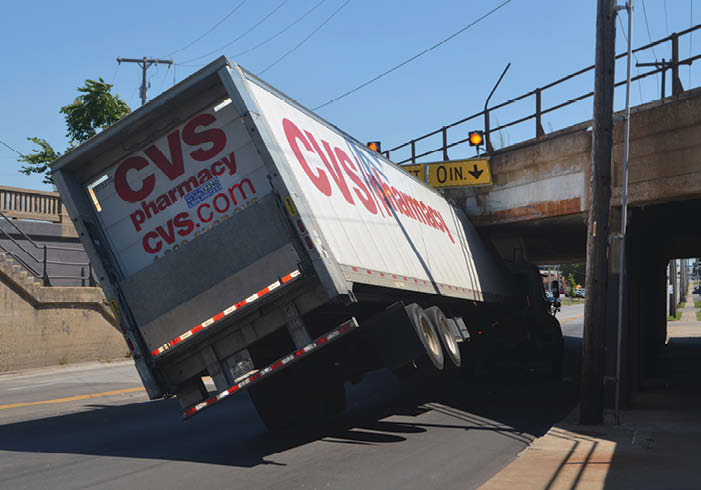 Truck. The whole right side of the cab was off the ground last Tuesday, August 16, after this semi-truck collided with the Independence Avenue railroad bridge. Paul Thompson

KANSAS CITY, Missouri – The sight is all too common; a capsized semi-truck blocking traffic along Independence Avenue.

Northeast residents know the spot. It’s on the east end of the Avenue, where railroad Bridge 19 crosses over the bustling artery. On both sides of the bridge, flashing lights accompany a bright yellow sign and prominent black lettering that screams the clearance height for all the world to see: ’12 FT., 0 IN.’ Unfortunately for travelers along Independence Avenue – and the semi-truck drivers who keep learning lessons the hard way – it’s a warning that often goes unheeded.

So what can be done to curb the issue?

According to Markl Johnson, Public Information Officer for the Missouri Department of Transportation, MoDOT doesn’t have the authority to take action against the repeated crashes.

“We can’t do anything because it’s within the city, and it’s operated by the railroad,” said Johnson. “We’re not affiliated in any way with that railroad bridge.”

The railroad company Johnson mentions is Kansas City Terminal Railway (KCT), which operates out of Kansas City, Kansas. The company’s Director of Transportation, Brad Peek, noted that KCT has invested roughly $50,000 into signage and repairs around that railroad bridge in the five years he’s been in his position.

“At our own volition, we went and added LED signs at the city’s right of way in the hopes of addressing a number of incidents that are happening,” said Peek. “We’ve just tried to increase the visibility of the clearance. We’ve also looked at possibly lowering the roadway through there to possibly increase the clearance. Our engineers have found a number of utilities that keeps us from being able to lower Independence Avenue there.”

The railroad has also looked into more costly fixes, such as re-designing and rebuilding the bridge itself. The company has applied for federal TIGER grants to help finance such an undertaking in the past, but those attempts have been unsuccessful thus far. Peek noted that it’s not economically feasible for the railroad to incur those costs on its own.

In the meantime, accidents at the railroad bridge will continue to cause headaches for both the railroad and the City of Kansas City, Missouri, which is forced to expend already strained police department resources each and every time a semi-truck overturns after clipping that bridge. KCMO Communications Director Chris Hernandez acknowledged that the bridge is causing traffic issues, and told theNortheast Newsthat the city has taken steps to try to fix the problem.

“From the City perspective, we’ve tried to help by posting large, prominent signs with the height restriction, as well as making sure that when we lay new asphalt there, we mill down the pavement so that we are not adding height to the road,” said Hernandez.

Just last week, two additional trucks failed to pass through the twelve-foot clearance. The most recent semi wedged tightly against the underside of the bridge, with metal twisting uncomfortably under the stress of meeting an immovable object. One full side of the vehicle remained suspended in air, with tires completely off the ground. Gary Armand, an over-the-road for a major international LTL carrier, questioned the driver’s experience level, especially given the prominent signage.

“Nobody I know with any kind of experience would have gone under that bridge,” said Armand, who has been driving for over 36 years. “That right there is just a common sense issue.”

The Northeast News also talked to professional drivers on a Facebook page dedicated to the trucking industry. A number of seasoned drivers indicated that being aware of the truck’s height is paramount and is reviewed in the classroom and at company safety meetings. One driver who pulls for USA Truck said that the thinking process is taken away from the driver, leaving them to blindly follow a GPS that isn’t aware of low bridges such as the ‘Truck Trap’ at Independence and Wilson Road.

There are products on the market designed specifically to avoid such issues. Garmin, a technology company with a focus on GPS products, created the Dezl product line to serve truck drivers. The GPS units provide custom truck routing, bridge heights, and weight limits, as well as an easy-to-decipher interface.

“Basically, once they’re driving through a highway and there is a height limit, a red bar is going to come across the top and give you a height limit for your truck, a height limit of the bridge, and how many miles you are away,” said Cesar Palacios, an automotive specialist in Garmin’s media relations department. “Once you miss it, it’s going to find a way to re-route you out of that.”

The Dezl units aren’t cheap – the product line starts at $279.99 and goes on up to $499.99 for the most advanced units. Still, the product is one tool out there for trucking companies to consider as accidents continue to pile up underneath the railroad bridge on Independence Avenue.

Regardless of why the issue keeps occurring, it remains a constant source of frustration for area motorists, the city, and the railroad.

“We just wish people would pay more attention,” said Peek. “I mean, the bridge has been there since 1912.” 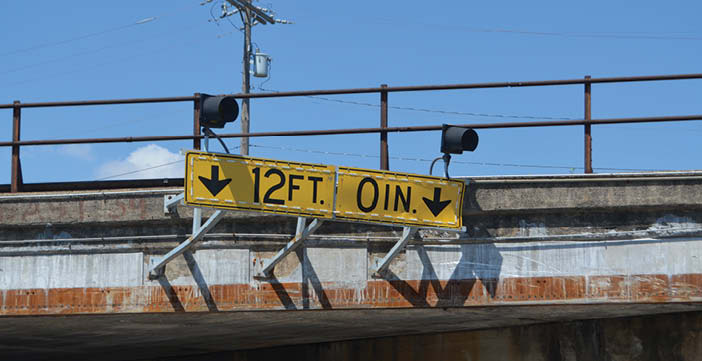 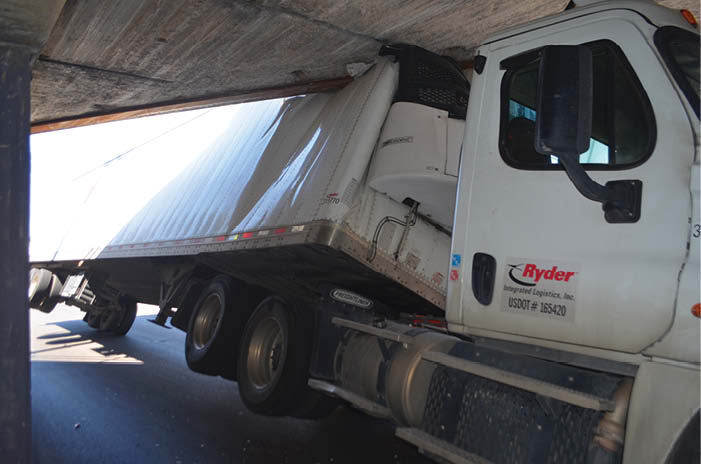 Bridge. A semi-truck got wedged between the road and the railroad bridge at the east end of Independence Avenue on Tuesday, August 16. Paul Thompson