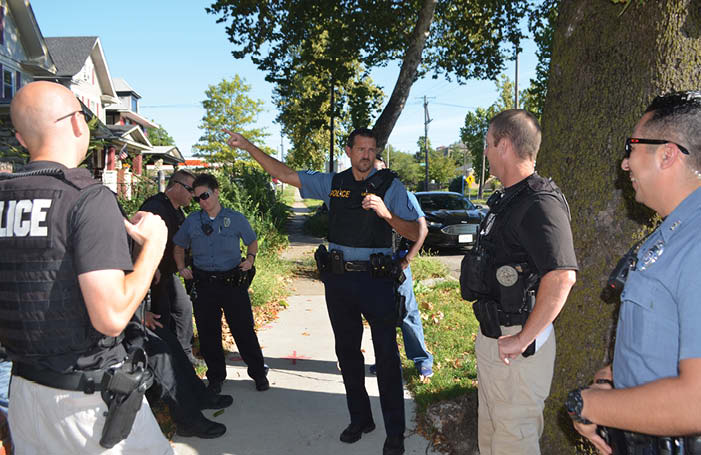 KCPD. Officers from Operation Street Audit’s Team 7 converse after searching a vacant home for a suspect on the morning of Monday, September 12. Paul Thompson

KANSAS CITY, Missouri – It’s before sunrise on the brisk morning of Monday, September 12, but that hasn’t stopped more than 100 law enforcement personnel from gathering at a pop-up command center near the intersection of Linwood and The Paseo.

Small groups of remarkably alert police officers discuss the tenets of the plan that brought them together: a Kansas City No Violence Alliance (KC NoVA) sweep designed to round up dozens of the city’s violent criminals. Dubbed ‘Operation Street Audit,’ the sweep will end up being a two-day operation that includes nearly 300 residence checks.

Operation Street Audit will also yield 34 arrests and clear a total of 170 warrants; 148 city warrants, 20 state warrants and two federal warrants. The state and federal warrants represent felonies. By all accounts, many dangerous criminals were put behind bars. Still, a morning spent embedded with the 10 officers of Team 7 revealed the occasionally banal legwork that goes into the glitzy statistics dropped during post-operation press conferences.

Team 7 was headed by Detective Shane Gaddis of the Fugitive Task Force Unit. His partner in the unit, Detective Rob Jorgenson, drove their take-home vehicle throughout the morning. Together, the two veteran officers arrest dangerous felony offenders on a daily basis.

The officers that comprised the rest of Team 7 were professional but courteous; focused, but calmly conversational. To an individual, they didn’t show outward nervousness about the operation. The group split into separate vehicles to begin the day, traveling en masse to a nearby destination at the 4100 block of Agnes, with the hope of corralling the lone suspect on their department-issued list with a felony warrant.

Gaddis and Jorgenson’s vehicle slowed to a stop a few houses down from the address, as the first hints of sunlight peaked over the dark, early morning sky. Across the street, a gaggle of elementary school students waiting for their school bus notice the parade of law enforcement vehicles. They wave sheepishly.

It becomes difficult to suppress the spike of adrenaline as Team 7 exits their vehicles and move purposefully towards the residence. Hoping to prevent a potential back-door escape, officers fan out to the sides and rear of the house, as a handful of others approach the front door.

Thump thump thump, came the assertive knocks from Gaddis. No immediate answer. Thump thump thump. Still nothing. Although it’s before 7:00 a.m., it’s hard to believe that no one heard the authoritative knocking.

After a minute that more closely resembles an hour, a woman answers the door. In a revelation that doesn’t register as much shock on the faces of the officers as expected, she indicates that she hasn’t recently seen the suspect. The surge of adrenaline subsides, if only slightly, as Team 7 retreats back to their vehicles to discuss the next address connected to the felonious suspect.

On the way to the second stop, Gaddis and Jorgenson describe the difference between city and federal warrants. Typically, criminals can be released on signature bonds – or in other words, released on their own recognizance (ROR) – on misdemeanor city warrants. Conversely, state and federal warrants typically require the payment of a cash bond prior to release. That’s why Team 7 decided to go after the suspect with a felony warrant first: he had the best chance of remaining behind bars.

He was also the only felony warrant remaining on Team 7’s list. Gaddis had received his list of sweep targets on Friday, September 9, and in doing his due diligence on the cases, realized that some of the most dangerous offenders on his list had already been removed from the streets. Some had been apprehended in other jurisdictions; one individual was in the hospital with life-threatening injuries. By Monday morning only one felony warrant remained, and Team 7 was committed to chasing their leads as far as they would go.

At the second stop, the officers found six security cameras outside of the house, as well as recent mail in the mail box. Once again, though, there’s no suspect. A neighbor said he saw the individual mowing the yard the day prior, but no one answered the door, and there’s no sign of him now.

As the team criss-crosses throughout the city, the in-vehicle conversation drifts away from operation talk for the first time. The vehicle passes by Arrowhead Stadium – it’s the morning after the Kansas City Chiefs executed a thrilling, season-opening fourth quarter comeback against the San Diego Chargers – and it’s Gaddis who can’t resist the urge to bring it up. Police officers watch the Chiefs too, and were just as shocked as anyone by the late heroics. Gaddis actually had to attend his son’s baseball game during the contest, but he recorded the second half and dutifully caught up with the action. For the record, his confidence in quarterback Alex Smith never wavered.

The residence of the suspect’s aunt again fails to turn up actionable intelligence. In the interest of due diligence, though, Gaddis left his card with a neighbor who said they’d let him know if there was any sign of the suspect. This is how policing works in practice: it requires more patience than in an episode of Cops. The search for the felony suspect will have to wait for another time.

Jorgenson’s vehicle nearly gets run off the road by a morning commuter, who fails to see the police car in his rear view mirror. Jorgenson honks, getting a look of mortification from the offending driver.

“Well, he stated his intentions,” joked Jorgenson, referencing the vehicle’s use of a turn signal. These guys have seen about everything there is to see on the roadway: Gaddis and Jorgenson indicated that they have put 5,100 miles on their department vehicle since August 5.

The fourth address yields no new information, and once again there’s no sign of any suspect.

Team 7’s fifth stop turns out to be a vacant property, and there doesn’t appear to have been activity at the home for some time. Interestingly, a witness approaches the cavalcade of police vehicles as they park, claiming they saw the individual ranting and raving last night at Truman Hospital. The officers note the intel before leaving the scene.

The team stops for coffee at a local QuikTrip before stop six. Inside, Jorgenson cradles a doughnut in one hand while holding a piping-hot cup of coffee in the other. Gaddis seizes upon the stereotype, joking that Jorgenson represents an ideal photo opportunity.

Team 7 again descends upon a vacant home at the next location, but with the front door ajar, the group’s on high alert. The officers pull their guns, carefully enter the doorway, and conduct a search of the premises. Once again, though, the search yields no suspect.

One officer described the nature of these sweeps thusly: “Hours of boredom, moments of chaos.”

This is the seventh consecutive residence check that has come up empty. Still, the officers remain upbeat despite the quiet morning.

“Man, we’re on the strikeout team today,” remarks one officer.

Finally, the team makes an arrest. It’s on city warrants, a harassment charge among a host of traffic violations, but the suspect made it to the KC NoVA master list nevertheless. The officers pack into a tight hallway on the third floor of the apartment complex, and Gaddis once again knocks on the door. It’s not long before the suspect emerges, clearly shocked to see nearly a dozen officers (and a photographer) outside his front door. He is handcuffed and led downstairs to the curb, where he awaits a wagon for transport. Gaddis later explains how the suspect will likely be processed.

“He’ll go down to one of our division stations. We’ll book him in, and they’ll fingerprint and photograph him,” said Gaddis. “It’s my understanding, with the new process, that they’ll give him about four hours to post bond. If he can’t post bond, he’ll be released on an ROR bond.”

The embed is all but over, but another incident extemporaneously kicks off at the complex. An older man gets into the passenger side of a vehicle and throws a handful of trash out of the window. It’s Officer Jorgenson who walks over to the vehicle, grabs the trash off of the ground, and places it back in the car, calmly asking the individual to find a trash can for the litter. He is greeted with a string of expletives.

What began as a simple request to find a trash can transforms, depressingly, into something more. Jorgenson runs the man’s information, and finds out that he has an open warrant for traffic violations. The man is promptly handcuffed to wait for transport of his own, and the visceral anger continues. More expletives greet each officer who tries to calm the man down.

When Jorgenson gets back behind the steering wheel, a sense of overt weariness has spread across his face.

With the media embed now over, Jorgenson and Gaddis head back to the mobile command center. It’s still more than 24 hours before the operation’s victorious press conference, and the mood feels less than celebratory. For Team 7, there’s still too much work left to do.