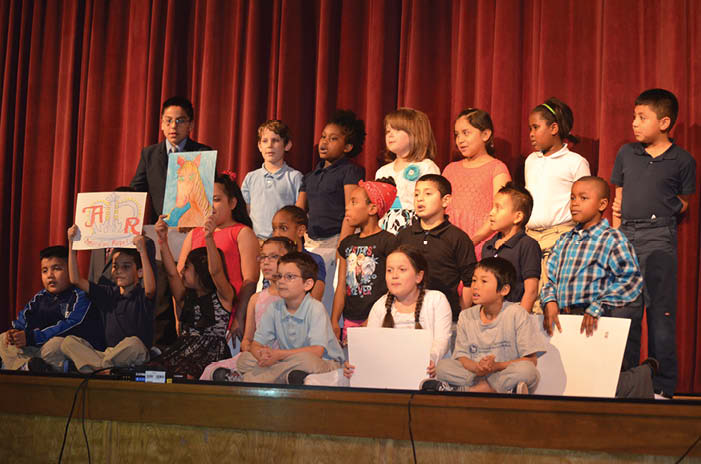 Since 2010, students at Gladstone Elementary are assigned an annual local community leader to study and commemorate through their “Heroes Project.” This year’s selection, Landon H. Rowland, accepted the nomination from the program last October. Sadly, Rowland was missing from the conclusion of the program, having lost his battle with cancer on December 28th.

As part of the tribute to their chosen Hero, the students create a ceremony to honor them. This year’s performance, held on April 1st, included African dances, student presentations, and a special song that was written about Rowland, in collaboration with singer songwriter Bob Walkenhorst. Performed by the First Grade class, they worked with Walkenhorst to write and learn the song for their live performance. The end result, “A Good Link in the Chain,” played on Rowland’s part in helping found LINC. The song is included in a DVD about this year’s Hero Project that was distributed during the ceremony.

Rowland was active as a community leader and was known as the former President of Kansas City Southern Railway, Director and Chairman Emeritus of Janus Capital Group, and founder of LEAD Bank. Twenty-one years ago, he helped found the Local Investment Corporation (LINC) which provides before and after-school programs throughout the Kansas City School District.

The Heroes Project celebrates “Ordinary People Who Do Extraordinary Things.” Rowland was selected by the school’s staff for his involvement in LINC and Caring Communities. Since he had begun chemotherapy treatments at the time of being selected, the students had to adjust the program to fit his needs. Care packages were put together based on his favorite items; his favorite color was represented as a gift of a blue fleece blanket. He also received cans of almonds, his favorite snack, and students included class photos as well as art work they created. Missie Condit, Vice-Principal of Gladstone Elementary, stated that Rowland especially enjoyed the portraits of him that students created and included in the monthly care packages.

Although none of the students ever had the chance to meet Rowland in person, they created a nickname for him, “the Big Boss Man”, that showed they understood the importance of his contributions to the community. Hero. A cheer for school hero Landon Rowland was performed by Ms. Brock’s class at Gladstone Elementary on Friday, April 1. A portrait of Rowland on display during the Heroes Project ceremony, held on Friday, April 1, at Gladstone Elementary.