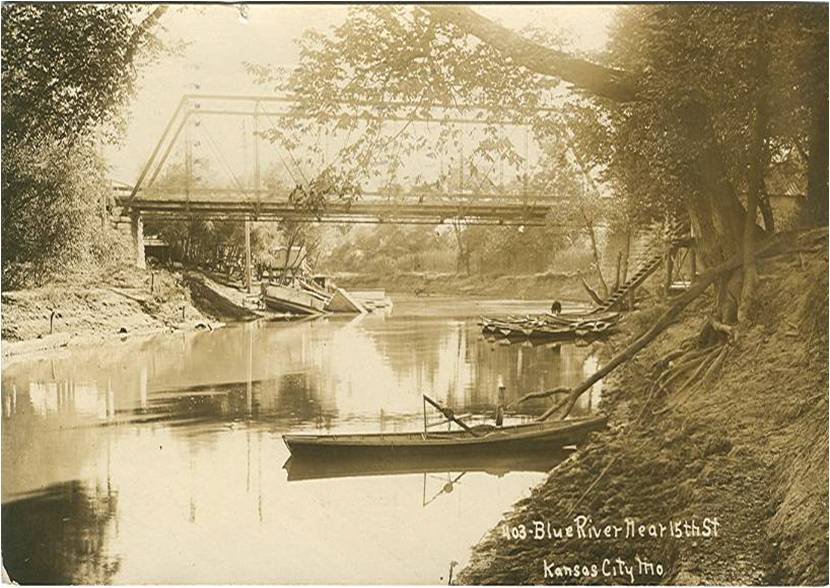 By MICHAEL BUSHNELL
Northeast News
April 5, 2017
The North American Postcard Company of Kansas City, Mo., published this Real Photo postcard, showing the Blue River near 15th Street, in the early 1900s.  North American Postcard Company’s owner, William H. “Dad” Martin of Ottawa, Kan., was long considered to be the father of exaggeration style postcards that featured huge vegetables, animals or plants that dwarfed the human beings in the same photograph. Such cards were hugely successful throughout the Great Plains states, where agriculture was the life’s blood of rural America.
This card was sent from No. 16 N. 15th St. in Kansas City, Kan., to Mrs. Henry D. Meyer of St. Charles, Mo., on June 26, 1912. The message is written in German.
The river is well below normal levels, as can be seen by the water line along the steep banks. Cottages and craft rental outfitters lined the banks of the Blue from near its confluence with the Missouri, all the way south into the Leeds area. At the time this photo was taken, the Blue River was a primary recreation area for Kansas City residents. Transportation was still difficult outside of the city, and the Blue could be reached by streetcar, automobile or horse and buggy very easily along a variety of east-west primary arteries. Warm spring days found boat and cottage owners alike, working vigorously to ready their cottages and watercraft for the summer boating season.
It was common to hear the whoops and hollers of spectators watching canoe races along the river throughout the summer. The “ox-bow” bend in the river just south of 15th Street was recently (within the past 15 years) straightened by the Army Corps of Engineers in order to alleviate flooding along its meandering path. The bridge in the background of the photo is the precursor to the four-lane Truman Road Bridge.