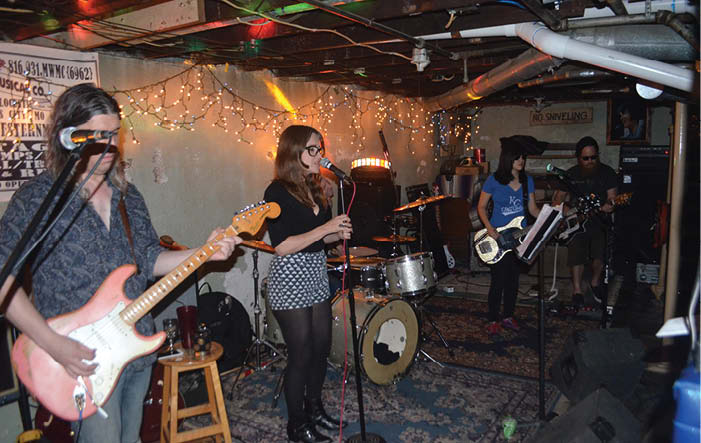 ‘Interstellar’ rock band The Philistines practice ahead of their upcoming concert at The Collonade. Paul Thompson.

KANSAS CITY, Missouri – Five of the six members of The Philistines have gathered for band practice at the Historic Northeast home of founding members Cody Wyoming and Kimmie Queen.

The house, affectionately dubbed ‘The Casbah’, is ground zero for the heady, space-rock grooves that define the band’s sound. Practice is held in the basement, which is illuminated with an eclectic mix of decorative lighting. It looks like a place designed by NASA to create the band’s signature genre – what they refer to as ‘interstellar rock and roll.’

“I think that it’s heavy guitar rock that tries to explore the cosmos – the nature of existence in the universe – while still being good shake-your-butt music at the same time,” said guitarist Cody Wyoming, the band’s de facto spokesperson. “You can close your eyes and dream about galaxies, or you can just dance to it if you want to. You don’t have to think about nothing.”

They’ll bring their unique style to Concourse Park’s Colonnade on Saturday, August 20 at 7:00 p.m., as a featured performer for the Northeast Arts KC SummerDusk Concert Series. The band relishes any opportunity to take the stage, but they acknowledge that it will be a special treat to perform in front of friends and neighbors in the Northeast.

“I think we’re also significantly more bombastic than a lot of bands that have played,” said Wyoming of the SummerDusk series. “We do like to play outside.”

On the topic of playing outdoors, Queen interjected seamlessly.

The rapport between members of The Philistines flows easily, both on stage and off. While Wyoming and Queen do much of the talking, it was guitarist Peal who succinctly wrapped up the band’s feelings about this weekend’s concert at Concourse Park.

“We’re always looking for somebody new to pummel,” said Peal in a matter-of-fact tone. The Philistines initially came together a couple of years back, after working on crew together at the South by Southwest festival in Austin, Texas. Wyoming and Queen had been looking for new musicians to collaborate with, so they figured it was a worth a shot to see if their new South by Southwest friends were interested.

“When I got back from that and Kimmie and I were talking about who we wanted to play with, I was like, ‘Well you know, I liked these people an awful lot,'” remembers Wyoming.

And so, The Philistines were born. Bassist Bacon, the group’s resident historian, traced the origins back to the month when they first began rehearsing.

“We all came together in 2013,” she remembered. “I think the first time we got together at Midwestern Musical Company was in July.”

The sound clicked, and The Philistines soon began performing throughout the metropolitan area. They eventually began collaborating on an album, TheBackbone of Night, which was released in May of 2016. They plan to tour the Midwest to help promote the album, but first, they’re playing a few local shows. After the August 20 concert at the Collonade, they’ll play The Crossroads Music Fest on September 10. They’ll also be participating in a Beatles Tribute show in support of KKFI at Knuckleheads on October 8.

On August 20, though, The Philistines will be keeping their special brand of interstellar energy right here in the Historic Northeast, at Concourse Park.

“I want to be a part of my community, for sure,” said Wyoming. “I want in on those shenanigans. If there are shenanigans, we want in.”