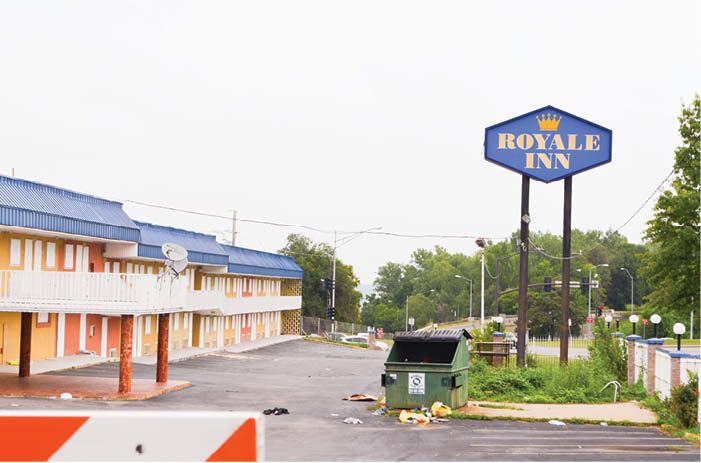 Motel. The Royale Inn (600 block of the Paseo) will be demolished now that KCMO has purchased the lot. Paul Thompson

KANSAS CITY, Missouri – The city’s purchase of the long-blighted Royale Inn (6th and Paseo) has finally been completed, and the structure is now slated for a swift demolition.

The city of Kansas City, Missouri completed the purchase for $1.8 million plus closing costs on Friday, July 29, signed the deed on Monday, August 1, and had the building secured by Wednesday, August 3. KCMO City Communications Director Chris Hernandez told the Northeast News on August 3 that the demolition process was likely to take a couple of months, but preliminary work was already underway. Hernandez noted that material samples had already been sent to a lab to test for asbestos.

“First off, I just want to say that the city is glad to have this purchase completed,” said Hernandez. “This is going to allow us to clear out what been a blighting influence on the Northeast neighborhood for quite some time. We are expecting the demolition process to take 60-90 days, and that gets us through abatements and demolition.”

The city is planning for the parcel to be a big part of the Paseo Gateway project, which proposes significant modifications to Paseo Boulevard (I-35 ramps to 9th Street) that would create a link between downtown Kansas City and the Historic Northeast.

Northeast Chamber of Commerce and Independence Avenue Community Improvement District president Bobbi Baker-Hughes stated her support for the city’s demolition plans, noting that the former motel had been a magnet for nefarious activities like prostitution and drug use in recent years.

“I believe that intersection will be beautiful once that building is taken down, and that means that the ugly business that happened at that address over many years will no longer be happening there,” said Baker-Hughes. “Both the Independence Avenue CID and the chamber are really very excited to see this progressing as quickly as it has to this point. That will be the catalyst to the redevelopment of that intersection, which will in turn benefit right down the avenue.”

The planned transportation improvements are expected to serve as a catalyst for the implementation of the Paseo Gateway Transformation Plan completed in 2013. In 2015, Kansas City and local partners received a $30 million Choice Neighborhood Grant from the US Department of Housing and Urban Development (HUD) to implement the Transformation Plan for the area surrounding the Paseo Gateway Project in the Northeast. The goal is to creatively harness and redirect downtown revitalization—while simultaneously improving the lives of public housing residents.

“It’s been very important to us, and I can tell you that there are a lot of very happy staff members here,” said Hernandez. “A lot of staff members, a lot of council members, and a lot of neighborhood leaders have been working together on this.”