Hubbard & Kurtz internship program is a boon for all 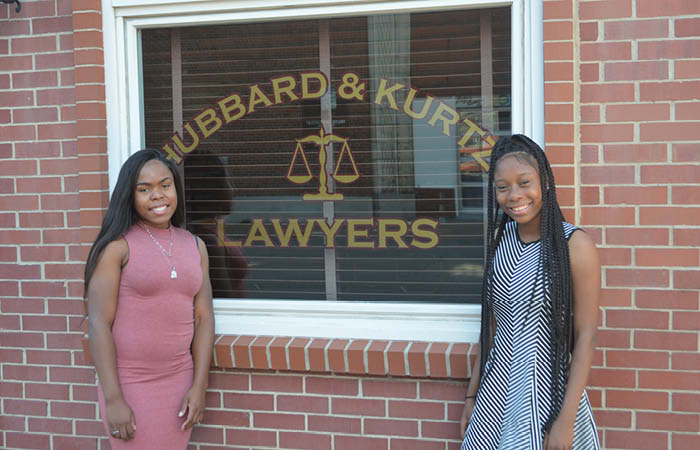 KANSAS CITY, Missouri – Aside from its respected law practice, the Hubbard& Kurtz law firm is perhaps best known for the larger-than-life artistic rendering of an eagle that covers the south side of its brick facade. It’s apt, then, that Bill Hubbard and John Kurtz are so committed to empowering their student interns to spread their wings.

Each summer, Hubbard and Kurtz invite two interns – one in high school and one in college – to learn the ropes of the legal field. Summer interns are expected to take dictation, sit in on meetings, organize events, and greet every guest who visits the office with firm handshakes, direct eye contact, and professional smiles.

In return, the interns help Hubbard and Kurtz keep in touch with the thoughts and feelings of the youth demographic. Although the lawyers combine for more than 60 years of experience in their field, they know that there’s always something to learn from upcoming generations.

“As a trial lawyer, when you get older you can certainly get out of touch with people out there in the community,” said Kurtz. “To hear young people talk and to know the things that are on their mind, that is all of great specific value to me as a lawyer and to us as a law office.”

That value could mean offering the perspective of a potential juror, or by Kurtz’s own admission, it can also be as simple as helping him optimally utilize his smart phone.

“Me being a very old guy, to have two young people here such as this summer, I learn so much from them,” said Kurtz with a smile. “This is very small, but one of the things they have taught me thus far is how to use the GPS on my phone.”

This year’s summer interns have a close connection to Kurtz. Leona Blount is a 17-year-old student at Winnetonka High School. She is also Kurtz’s goddaughter, as the lawyer and Blount’s mother got a chance to know each other through church activities in the 1970s. Crystal Cook is a 19-year-old at Neosho County Community College. She met Kurtz as a young teenager, when her mother served as a witness on one of his cases. Cook kept in contact with him, and eventually served as a high school intern between her sophomore and junior years at Hogan Prep. Cook said that she was happy to come back for another internship opportunity, as Hubbard & Kurtz empowers her to lend a real hand in day-to-day operations.

“It’s pretty much the same when I come back,” said Cook. “He expects a lot from me.”

This summer, perhaps Cook and Blount’s biggest project was working to set up a charitable event for the Children’s Emergency Fund. The organization brought in Kansas State University basketball coach Bruce Weber, in addition to several other personalities connected to Kansas State athletics. A large group of disadvantaged area students gathered in Hogan Prep’s gymnasium for a motivational speech from Weber. The interns blew up 100 basketballs and put together just as many gift bags for the kids to take home.

Both interns have learned something about their own career aspirations while working at Hubbard & Kurtz this summer. Cook was inspired by a visit from a petite, female FBI agent, who casually dropped a tidbit about taking down a much larger man in the field. Crystal’s interest was quickly piqued, and she said she’d love to turn her Criminal Justice degree into a career with the FBI. Blount said that she’s grown more interested in working with computers.

“I like computers,” said Blount. “I feel like when I get on a computer, it can only help me find what I need.”

Kurtz said that he’s been most impressed by how responsible each of his summer interns have been this year. He added that their dedication has made it an easy decision to trust them with big, engaging projects.

“I know that old people like me get thrilled to see young people who have maturity beyond their years,” he said. “These two young ladies have that in great measure. I love watching that, and I love entrusting things to them.”

On the other side, Blount said that she’s happy to have another adult mentor in her life outside of her own family.

“It’s really nice knowing that there’s someone else besides your parents that really cares for you and is really there for you,” said Blount. “He’s a really nice and good person that wants you to do best in life.”

“He’s seen it all, and he knows it,” said Cook. ”I really trust him, so it’s a really good feeling.”

Kurtz & Hubbard represent clients on both sides of the state line, with cases related to wrongful deaths, personal injuries, and elder, probate, and business law. For more information, check out their website at mokanlaw.com or call the office directly at 816-472-4673.