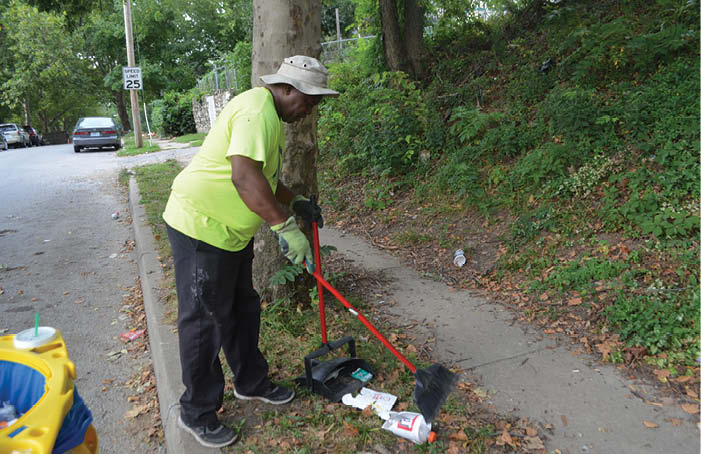 Ambassadors. Independence Avenue CID ambassador Herbert Hoskins cleans up a sidewalk near the Avenue during his shift on Tuesday, August 23. Paul Thompson

KANSAS CITY, Missouri – Independence Avenue is trending in the right direction, says Kenneth McKinzy, and he would know.

McKinzy is an Independence Avenue Community Improvement District (CID) Ambassador, and is the longest-tenured member of the six-man crew. Each weekday morning he wakes up, marches out to the Avenue wearing one of those increasingly-recognizable fluorescent yellow CID shirts, and does his part to better the community. On many mornings, that means picking up the hundreds of pounds of litter that were scattered along the corridor during the previous night.

For the sake of the CID’s clean-up efforts, Independence Avenue has been divided into four zones. McKinzy handles Zone 4, which comprises the area from Hardesty Avenue to Ewing Avenue. Mondays are undoubtedly the worst days for McKinzy and the rest of the team – people are still hard on Independence Avenue during the weekend – but by the Tuesday morning last week when McKinzy allowed theNortheast Newsto shadow him for a spell, he was eager to talk about the corridor’s progression.

“When we first started, you’d hit this, and then about 30 minutes later it would look like you never were there,” said McKinzy. “It used to be that I’d never see a dent. Now, you can see the difference when Wednesday and Thursday come. It looks nice. Can you imagine going the whole week, and you can’t see any improvement?”

As the CID Ambassadors have slowly found success in cleaning up the Avenue, members of the community have begun to take notice. McKinzy says that drivers stop as often as once or twice a week to thank him for all of his hard work. It’s those encounters that give McKinzy hope for more positive change.

“A lady pulled over this morning, and she showed her appreciation for how we’re keeping the area clean,” said McKinzy. “She was going to work, too, and she had enough time to pull over and show her appreciation.”

The Ambassadors have even been recognized by KCMO Chief of Police Darryl Forte, who recently stopped to thank the CID employees for making Independence Avenue look better than ever.

“He gave us some props a couple of weeks ago,” said McKinzy. “He was up in Zone 1, and gave one of us ambassadors his number and everything.”

Herbert Hoskins is a CID Ambassador for Zone 3, which covers Hardesty Avenue to Myrtle Avenue. Also an overnight maintenance worker for the City of Kansas City, Missouri, Hoskins appreciates the kind words from passersby along the Avenue.

“On hot days, people will pull over and give us cold water, or in the winter time they give us hot chocolate,” said Hoskins. “It’s not all the time, but a little bit helps.”

Those moments of appreciation are critical for the CID ambassadors, who can sometimes gather as much as 200 pounds of litter on a given day. Not every encounter with the public involves words of kindness.

Hoskins told a story of a man in a pickup truck who recently stopped to talk to him while he was picking up litter near the intersection of Independence Avenue and Van Brunt. The man asked, in a good-natured tone that belied his true intentions, if there was enough trash out on the Avenue. When Hoskins acknowledged that there was plenty, the man emptied the trash from his vehicle directly onto the street.

“He threw out some QuikTrip cups, a McDonald’s bag, potato chip bags, and then went on down the road,” said Hopkins. “That’s part of the job.”

It’s these types of incidents that keep the CID Ambassadors from other beautification projects like watering plants, cleaning up graffiti, or clearing alleyways along the corridor. Every hour spent picking up after weekend revelers is another hour Ambassadors are kept away from vital improvement efforts.

“The people that live in this area need to get on board,” said McKinzy. “They act like they don’t know who the CID is, and we’ve been pitching this for going on three years.”

Recently, the CID Ambassadors have taken to passing out ‘Community Help’ cards to people they encounter along Independence Avenue. The cards provide addresses and phone numbers for crucial service organizations, employment agencies, and emergency assistance providers. It’s just one more way in which the CID hopes to better the community.

“I want people to know that we’re doing more than just picking up trash,” said Hoskins. “Like (CID President Bobbi) Baker says, we’re pretty much the eyes and the ears of the Avenue.”

The Avenue will soon have even more eyes and ears working on its behalf, as the Independence Avenue CID is currently in the process of hiring three more Ambassadors to the team. CID President Bobbi Baker-Hughes says that the hires will allow all Ambassadors to work in pairs, while also providing some weekend hours and allowing the CID to devote time to improvement efforts other than litter removal.

“I hope that we’re going to be able to do more alley work. Ultimately, our alleys really can be another form of transportation,” said Baker-Hughes. “We’ve got some long-term plans to use alleys in much safer and more productive ways than they are currently being used.”

Other than that, Baker-Hughes hopes the addition of more personnel will allow the Ambassadors to keep up the good work.

“We only hear the haters,” she said. “But the Avenue looks better than it ever has.”