Area youth have a P.A.L. this summer 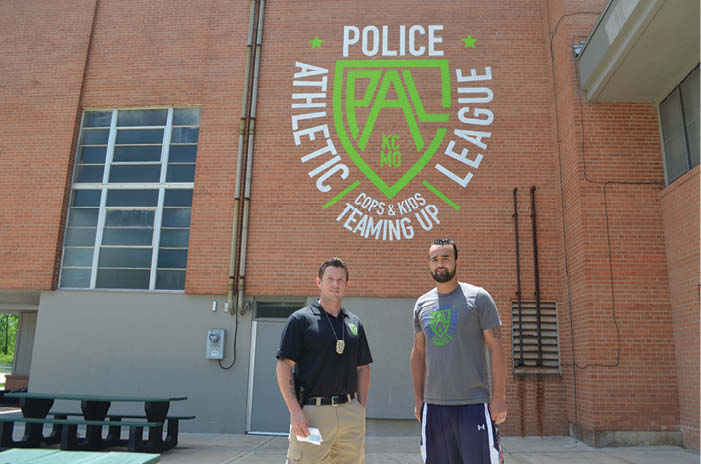 The programming begins on Monday, June 6, but registration on a first come, first served basis is already underway. P.A.L. Operations Sergeant Sam Spencer told the Northeast News that the cost-effective summer program is among the best values in the city.

“The good thing about that is it’s just $25 for the kids; that’s for the entire eight weeks. A lot of other programs are a couple hundred dollars a week,” said Spencer, who is one of seven full-time KCPD personnel who run the program. “It’s got to be by far one of the cheapest programs out there, and there’s going to be all kinds of different things here. Flag football, basketball, softball. Small things like that, but then we’ll also have a weekly field trip.”

Officer Antoney Perez, another of the Police Athletic League’s regular personnel, offered a compelling pitch for the summer programming.

While fun is a focal point of the Police Athletic League, its stakeholders are serious about the kids who participate. The program operates on a budget of just $150,000, which is largely comprised of donations and fundraising efforts orchestrated by the dedicated 19-member P.A.L. Board. The KCPD provides officers to run the program, and the facility itself is a spruced-up version of the old, dilapidated Blue Valley Recreational Center. The facility now features a football/soccer field, a softball field, a boxing gym, a computer lab, a gymnasium with a workout area, and a gathering space to play board games or video games.

Although the Police Athletic League isn’t a highly-funded operation, Spencer and Perez were able to provide multiple anecdotes that displayed the board’s willingness to go above and beyond for area youths.

In one instance, a board member paid two-thirds of the cost for a new refrigerator that was needed to keep the free lunches provided by Harvester’s fresh. When a P.A.L. participant was struggling to scrape together funds to bury her grandmother, the board paid the entire $1,600 cost, enabling the young high school student to get back to the extracurricular activities that would eventually help propel her towards a college education. There’s also the story of the P.A.L. member who was working two jobs to save up for her first year of college. Over the course of one email chain, board members pledged enough funds to get her through the first semester.

In another telling example, P.A.L. was attempting to provide a complimentary Thanksgiving dinner for a family who they discovered didn’t have an oven to cook it in. When the board was approached with the conundrum, they were quick to provide a solution that ensured the family would be eating well on Thanksgiving night.

“We took it back to our board, and our board said, ‘Okay, go pick out what color they want,'” remembered Perez. “They had it delivered to their house that week so they could have the Thanksgiving dinner.'”

It’s stories like these that keep the P.A.L. staff motivated to help turn shy kids into outgoing, upstanding members of their communities. Spencer and Perez envision the Police Athletic League as a safe space for those from all walks of life.

“Kids can’t control who their parents are, and they can’t control their financial situation. I grew up poor – we didn’t have anything, we got evicted out of apartments, my dad was in prison,” said Spencer. “So I can empathize, and I can kind of see where they’re coming from. It’s good to be here for them, and try to be somewhat of a positive role model.”

“You get these kids coming down here, and they’re like, ‘It’s the Police Athletic League, I don’t know about this place,'” acknowledged Perez. “The next thing you know, it’s a month down the road and they’re giving hugs and inviting us to barbecues.”

As helpful as the board can be, there’s always room for more volunteers at the Police Athletic League. Even as Spencer showed the facility on a pristine spring afternoon, his eyes drifted towards the softball field, which had begun sprouting weeds.

“Looking at the softball field now, I want to put all that new pebble down and get those weeds up,” said Spencer. “I think it looks bad.”

Anyone looking to volunteer with the Police Athletic League needs only to stop by the facility (located at 1801 White, KCMO, 64126) beforehand to fill out some paperwork, as well as pass a background check to work with kids. From there, the enrichment opportunities go both ways.

“It’s amazing, because you know I grew up in this neighborhood too,” said Perez. “I know how far I’ve come, so to see these kids making the same changes that I’ve made in my life is just kind of amazing to see.”