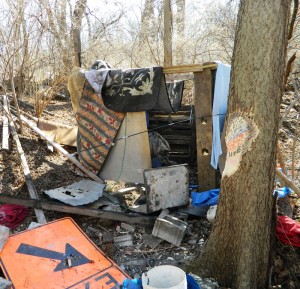 If you’ve taken the Paseo entrance ramp to I-35 northbound any time recently you’ve no doubt noticed the blue and green tarps in the woods and the seemingly endless parade of foot traffic along the east side of the entrance ramp to the top of the hill where someone “flies the sign” to garner spare change, food, water and the occasional free beer or half pint of hooch. This morning however, acting on citizen complaints, workers with the city’s Parks and Recreation Department along with Police Officers eradicated the encampments, discovering a number of “hot” portable meth-labs in the process. 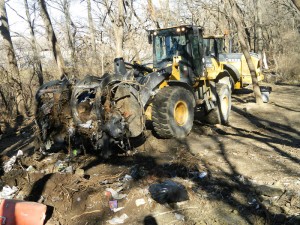 The city’s Parks and Recreation Department brought in the heavy equipment Friday to assist in the eradication of a network of homeless camps located in the woods along I-35 and the Paseo entrance ramp. Parks officials estimated that close to 200 people lived in the encampments. Police officers who accompanied Parks Department crews busted approximately five mobile “hot” meth labs in the encampments. Michael Bushnell

“It really was a pretty sophisticated kind of layout” said one Parks Department worker as he stood in the middle of a “courtyard” of sorts that was once ringed by tents, tarps and shanties. “This one here” he said, pointing to a holed out area in the ground, ringed by large stones. “This was a huge tarp that had separate sleeping quarters, a latrine and even a kind of patio area.”

The area is accessed only by a complex network of paths and walkways cut through the woods. Like cul-de-sacs off a residential street, tents and tarps were arranged around a central courtyard of sorts, all with separate cooking areas, latrines and clothes lines. Each latrine consisted of a 5-gallon bucket with a toilet seat on top. When the bucket got “full”, it was removed to a ditch a short distance away and a new bucket was secured and the process started all over again. Each cul-de-sac area off the main path housed five to seven tent “spots” much like a modern campground. Farther down the main path, in a secluded hollow, a makeshift cabin crafted from pallets, lumber, tarps and stolen street signs had been erected by an enterprising person. Complete with windows and a port for cooking fire smoke to escape. Clearly, there’s a pecking order even among the homeless. At one of the primary points of access to the encampments, there was even a small bulletin board wedged in to a tree where printed messages could be left to occupants, reminiscent of the hobo camps of old with their own communication signs. It is estimated the complex network of trials and living areas along the hillside housed upwards of 200 people at any given time.
Police and FBI officials accompanied the Parks Dept workers in case any resistance was encountered by squatters and to deal with the hazards that come with portable methamphetamine labs. “We picked up one of those piles and liquid just squirted out all over the place” said one Parks Department worker who was clad in a white safety suit. “We found about five hot labs up here and another five or so down over the hill” he said, pointing to an area farther in the woods toward  Guinotte Ave.

Police made no arrests but Drug Enforcement Units from the department systematically cleaned up the labs eliminating the bulk of the hazard to Parks Department workers who were responsible for the clean-up. “It’s a never ending cycle” said another Parks Dept. worker. “We’ll be back here in six months and it’ll be built back up, probably better than this”. 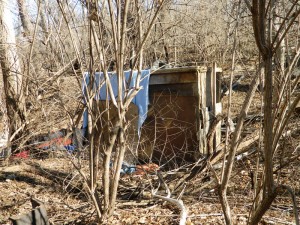