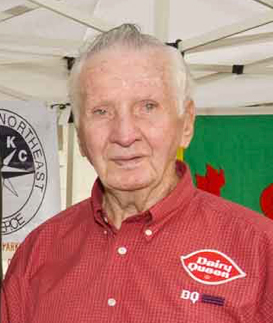 John W. McMurray
John W. McMurray, 93, passed away Sunday, April 23, 2017, surrounded by his loving wife and many family members. Visitation was from 4:00 p.m. to 7:00 p.m. on Tuesday, May 2, at Passantino Bros. Funeral Home (2117 Independence Blvd.). Family and friends gathered on Wednesday, May 3, at Our Lady of Sorrows Catholic Church (2552 Gillham Rd.), where the Mass of Christian Burial began at 10 a.m. Burial followed at Mount Olivet Cemetery.
Johnny was born January 5, 1924, in Kansas City, MO. Johnny and Esther met at La Fiesta Ballroom and dancing was their claim to fame. Johnny worked for Cash Bargain Lumber Co. for 38 years and, later in life, he and Esther owned and operated the Dairy Queen on Independence Avenue for 33 years. Johnny loved baseball, especially the Royals. He enjoyed watching them on TV and listening to them on the radio at the same time. He would never miss a game.
Johnny was preceded in death by his parents, Thomas and Hazel (Farrar) McMurray; his brothers, Jimmy, Joseph, Augustine, Leo, Tommy, and Leonard; and his sisters, Ella, Mary, Bernice, Margaret, and Frances. He is survived by his wife of 58 years, Esther (Saladino) McMurray; brother and sisters-in-law, Edward and Vincie McMurray, Rose Cerniglia; brother-in-law, Karl Herman; and many nieces and nephews.