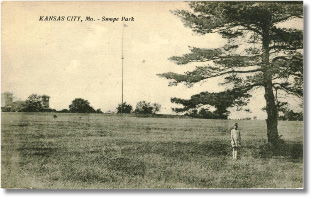 Swope Park was a donation to the City of Kansas City made by Col. Thomas Swope, prominent area real estate developer. Swope arrived in Kansas City in the late 1850s amid promises of fortunes being made on the edge of the western frontier.

The 1,350-acre park was dedicated on June 25, 1896, with much fanfare. Mayor James Jones declared the day as Swope Park Jubilee Day and a grand celebration was held near the parks entrance on what is now Swope Parkway and Meyer Boulevard. Swope was not in attendance and chose to visit the park earlier that morning in his carriage. Unrecognizable by many due to his reclusive lifestyle, Swope was pleased with the outcome, despite critics of the park decrying its location roughly 3 miles outside the then city limits.

This sepia toned photo postcard was published by Jno John Straley of Kansas City, Mo. Straley lived in an apartment building in the 200 block of North Mersington Avenue during the 1920s and 1930s and published a full line of postcards showing various views throughout the Kansas City area, all printed in sepia tones and printed in France.

Some of the views were taken from the front steps of his apartment building, looking to the west and north on Gladstone Boulevard. This specific card shows the famous Swope Park flagpole donated to the city by local businessman and philanthropist Jacob Loose, the namesake for Loose Park. The flagpole was noted to be the tallest in the city at the time of its dedication in 1915. The dedication was attended by roughly 90,000 people. The City of Kansas City recently completed an extensive renovation of the 200-feet tall flagpole and re-dedicated a plaque honoring Jacob Loose. The event was attended by two great-nephews of Loose, George and Nathaniel Bates.