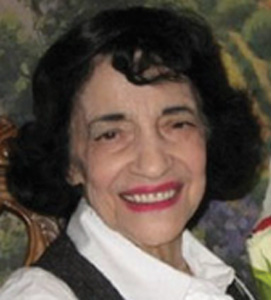 Lydia was born in Fall River, Mass. on Nov. 29, 1924, to Manuel Pimental and Claudina Teves. Although she stood only five feet in height, it was never a detriment to this feisty woman who was a model and singer in her younger years. It was while singing at the Latin Quarters in New Port, R.I., that she met her future husband during World War II. They were married on Nov. 30, 1946, and moved to the Northeast area of Kansas City after a brief stay in Amoret, Mo.

Her parents, who emigrated from the Azore Islands, only spoke Portuguese as did nearly everyone in the quaint town of Fall River. As she slowly learned English in grade school, she would come home and teach her parents. But that’s how Lydia was. Through her entire life, she was nonjudgmental and constantly helping others. She never thought about herself and only saw the good in everyone.

Her five children were her life. She would fiercely defend and stand behind them no matter what. A typical breakfast for most children would consist of one thing such as cereal, or perhaps pancakes. Not the case in the Castle family. There were many mornings when Lydia would prepare five different foods for her kids depending on what they wanted.

She was one special lady and the loss of her is deeply felt by many. She will be missed, but her spirit and strength, lives on in each of us and in the lives that she touched. She lives on in all those who have been touched by the love, impeccable strength, humor, wisdom, and beauty of her soul, each in their own unique way.

Lydia is survived by her five children; Dale Castle, Doug Castle, Sandy Henrich, Sharon Nelms, Karen DeVall, sixteen grandchildren and many great-grandchildren. She was preceded in death by her husband, Edgar Castle, one daughter, four sisters, one brother, one granddaughter and three son in laws.