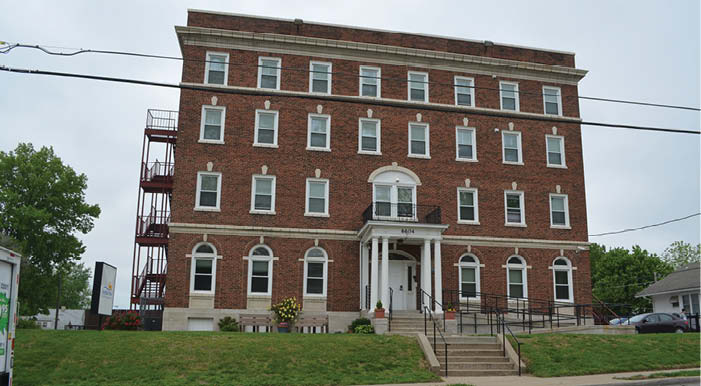 Sheffield Place. The transitional living center has formed a partnership with Hampton Inn & Suites to provide quality jobs to the women who need them most. Paul Thompson

Editor’s note: Dana’s name has been altered for this story.

KANSAS CITY, Missouri – Roughly two years ago, Dana arrived at the Sheffield Place transitional living center desperate to make a change. She was fresh out of prison, pregnant, and hoping beyond hope for a chance to prove she could start a new, better life.

Fast forward to the spring of 2016, and Dana has found exactly what she was seeking. She’s now drug-free, living on her own in Sheffield Place permanent housing, and gainfully employed at Hampton Inn & Suites, which offered her the chance to make good on her promise of change.

Dana’s employment at Hampton began with KCPD East Patrol Officer Jason Cooley, who discovered through the grapevine that the hotel was in the market for new employees. A consistent proponent of Sheffield Place, Cooley suggested that Hampton consider working with the center.

Before long, a partnership was born. Dana was one of the first women afforded an opportunity to interview with Hampton, which had openings for several housekeeping positions. She ended up being hired in a supervisory role in June of 2015. The hire has been a rousing success, as Dana was recently named the location’s Employee of the Month.

“She was extremely excited, and I think I was just as excited as she was,” said Alli Vetter, of Hampton’s human resources department. “She’s always pleasant, always positive, and always thankful to fellow employees for their assistance.”

For Dana, the Employee of the Month honor is simply the cherry on top of her time at Hampton. To her, the opportunity was about more than a steady paycheck; it was a new lease on life.

“It has affected me in the best way. It’s amazing,” said Dana of the position at Hampton. “When I found out, I was just so excited. They had done a background check and a drug test. My background is not the greatest – I’m actually a convicted drug felon. For them to look past that and allow me to prove that was in my past; that was amazing.”

Of course, she did much more than outrun her troubled history. Although Dana lacked confidence when she began at Hampton, Vetter said that she was enthusiastic and eager to please from the beginning. She often sought feedback on her job performance – asking for areas where she could improve, as well as areas of strength.

Over time, Dana showed herself to be an invaluable asset to Hampton. Any risk they had assumed by offering her a second chance was paid back – and in spades. What’s more, Dana’s success at Hampton has opened the door for other women from Sheffield Place to follow the same path.

“She was extremely motivated, with a great positive attitude from the beginning. She’s really been a rock star for us,” said Vetter. “I think that was paramount. Dana came on in June, and she still to this day thanks us for hiring her. When I interact with her, she is still thanking us for the opportunity.”

Dana’s success at Hampton was far from pre-ordained; it required dedication from the moment she arrived at Sheffield Place. The women of Sheffield Place do not stick around long without a legitimate desire for change. The rules are strict – women who live on site must have weekly visits with a case manager and a therapist, while also participating in at least 10 hours of clinical services each week. Ninety percent of the women have come from abusive relationships, 90% are addicted to drugs, and 92% have a mental health diagnosis. While residents can stay at Sheffield Place for up to two years, Director Kelly Welch indicated that a significant number don’t last nearly that long.

“You have some people that come in, they’re here two or three days, and they’re like, ‘Oh, there are too many rules.’ It’s a lot of structure,” said Welch. “What we want to do is get them in, get them stable, and get them into permanent housing.”

Dana stayed at Sheffield place longer than most; 18 months of memories in all, including the birth of her second child. She still gets emotional at the thought of the facility that instilled in her the faith she needed to persevere.

“They got me in, and ever since that day, it’s just changed my life in every way. They gave me hope, they gave me self-esteem, self-confidence, self-worth. Every single one of those people really, really cares,” Dana said. “They just showed me what I’m capable of. Now I’m happier than I’ve ever been in my life.”

Thanks to the successes of Dana and other Sheffield women, what began as a jobs program has transformed into something much more. Welch says that Hampton has turned into a true partner: conducting classes about interviewing techniques, attending and providing gifts at open houses, holding cleaning supply drives, and even helping Sheffield Place apply for Hampton grants.

“They’re kind of big-picture supportive, which is cool,” said Welch. “The Hampton is really good about working with them and being supportive of those moms.”

Welch is especially appreciative to Officer Cooley and East Patrol, who were huge supporters of Sheffield Place even before facilitating the successful partnership with Hampton Inn & Suites.

“East Patrol does a ton of stuff for us,” said Welch. “They’re super supportive of our families, to the point of doing Christmas gift drives for us. It’s just above and beyond. That’s really been great.”

“It’s not only just the paycheck, but if we can empower them, I think that’s fantastic,” said Vetter. “I think that we just continue on the road that we’ve gone down. It’s good experience to have, and a good industry to get your foot in the door. Hotels are notorious for being able to move your way up.”

For her part, Dana doesn’t have plans to move on from Hampton Inn & Suites anytime soon.

“I didn’t have a lot of confidence in myself in general, and between Sheffield and that job, it’s given me a whole lot of confidence,” she said. “Even on my worst day, it’s better than my best day when I was getting high.”