Back to School 2016: Soccer for Success program still seeking participants despite rapid growth 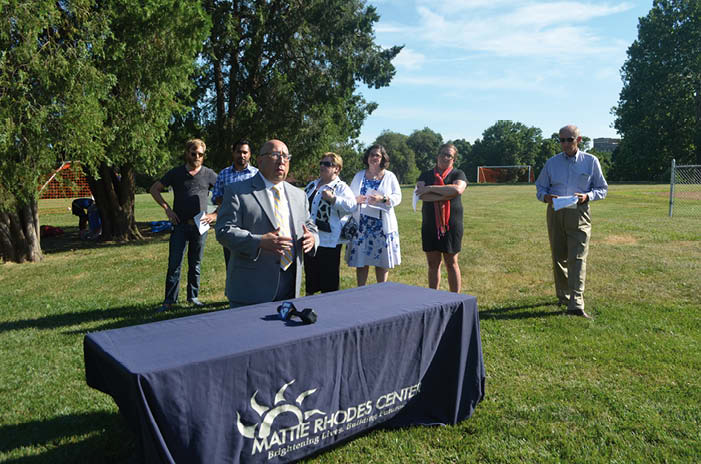 Less than a year later, participation in the U.S. Soccer Federation’s free program – which Mattie Rhodes Center is an official trained provider for – has swelled to include more than 800 students. With the 2016-2017 school year set to begin, Mitchell hopes the program designed to instill healthy habits in children can keep expanding throughout the region.

“It’s a pie in the sky dream, but I would love to see every kid in the metro area to have access to this program,” said Mitchell.

For now, Soccer for Success is finding a solid foothold in the Northeast. The program currently partners with Northeast Middle School, J.A. Rogers Elementary, Scuola Vita Nuova, Frontier School of Innovation (Elementary and Middle School), and James Elementary, while also hosting programming at Budd Park. Mitchell noted that administrators at the program’s partner schools have typically been excited about the opportunity.

“The principals could hardly sit in their seats because they were getting something that didn’t have strings attached,” she said.

Mattie Rhodes currently rents space at James Elementary and Budd Park, meaning that anybody can participate in Soccer for Success at those locations. Students wishing to participate at the other sites must attend those schools in order to register.

Mitchell added that each child who participates in the program gets free soccer gear provided by Nike. That includes a jersey, socks, shinguards, and at the end of the season, a brand new soccer ball. The idea is that program participants will continue to stay fit and active even when the program isn’t running.

“It works as a vehicle that hopefully serves as a way for them to engage their family in physical activity,” said Mitchell. “Around 65% of our kids had a better BMI at the end of one of our 12-week programs. We’re able to show the health benefits of kids participating in this program.”

The Mattie Rhodes Center recently earned an $80,000 grant from the Kansas City Healthcare Foundation to provide increased youth programming at several ‘safe zones’ throughout the Northeast, which includes Budd Park and James Elementary.

“We’ve been over in this neighborhood now for a little over ten years, and one of the daunting needs that we see all the time is a lack of youth programming, and people’s fear of coming and using the park,” said Mattie Rhodes Center president and CEO John Fierro. “So when we had the opportunity to take the lead and request some dollars, it was a no-brainer.”

Mitchell helped put together the center’s grant proposal that was submitted to the Kansas City Healthcare Foundation. With new grant funds now in hand, she anticipates even greater programming options coming in the pipeline.

“Not everybody wants to play soccer, and that’s okay,” said Mitchell. “That was the backdrop for this: what other amenities are here? There’s tennis courts, there’s basketball courts, there’s two playgrounds, there’s a baseball field; what can we use that’s already in existence?”

Familes can register their kids for the Soccer for Success program during the Mattie Rhodes Center Back to School Fair on Thursday, August 4, from 4:00 p.m. to 7:00 p.m. at the center’s Northeast office (148 N. Topping). Free school supplies will also be distributed during the event, while supplies last. Registration forms are available at all Mattie Rhodes Center locations.

To learn more about Soccer for Success, go to www.mattierhodes.org and click on the special tab for the program. Program Coordinator Amanda Mitchell is also available to answer questions at (816) 581-5656.