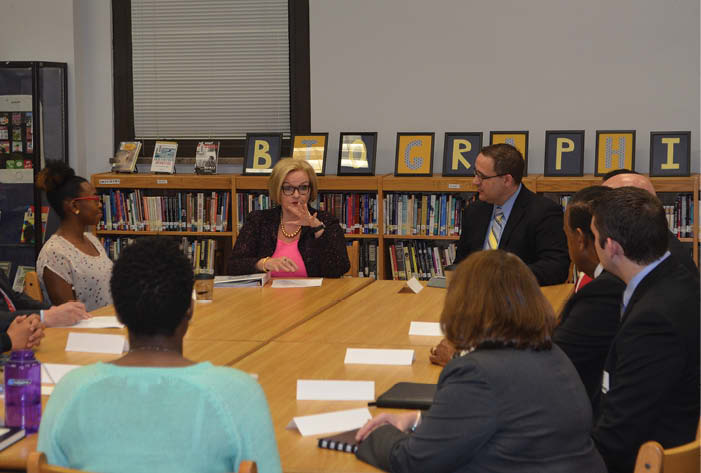 KANSAS CITY, Missouri — If you want to fix the problems currently plaguing colleges, you go to who they’re affecting the most.

“We have a crisis in this country,” McCaskill said. “We’re seeing it in the incredible load of student debt enveloping our families. And what student loan debt does is diminish our economic growth.”

At Lincoln, McCaskill discussed her proposals to boost Pell grants — which includes making them available for more of the year — and on increasing transparency in student loan programs so students and parents can make informed comparisons. More than one student at the roundtable discussion noted how they’d like to be made more aware of the consequences of student loans and the potential debt associated with that burden.

“There’s not a lot of education on what it means to take out loans,” Chebet Buckner, an early college student enrolled at Lincoln and MCC Penn Valley, said. “Students aren’t learning what comes with the loans they take out.”

According to the Institute for College Access and Success, the average debt for a Missouri graduate of a public four-year institution or private non-profit four-year institution is $25,844, the proportion of Missouri graduates from those institutions with debt is 59 percent. Missouri ranks ‎33rd in the nation in terms of how much debt students graduate with and 31st in the nation in terms of how many students graduate with debt.

The senator is backing legislation to let individuals refinance their student loan debt at lower interest rates — a measure which is fully paid for, and which the U.S. Department of Education says would benefit more than 500,000 Missouri students by letting eligible borrowers refinance their high-interest federal loans to the low rates offered to new federal student loan borrowers.

The bill would also let eligible students with high-interest private student loans convert their private loans to government loans. McCaskill also called into question elected officials in Jefferson City for threatening cuts to higher education when they should be finding ways to increase college accessibility and affordability – a fiscally responsible policy for Missouri in the short and long term.

“I had the opportunity today to speak to so many Missouri students who are doing everything right —working hard to get into good colleges — but who are going to be strangled by debt for years after they graduate,” McCaskill said, who noted to students that she worked as a waitress and took out student loans to help pay her way through college and law school at the University of Missouri. “Hearing from these folks directly will shape my work in Washington on much-needed reforms to our Pell grant and loan refinancing systems, on transparency and accountability for institutions, and on incentivizing higher and faster graduation rates so we can better help Missouri students and families succeed.”

One presidential candidate, Democratic hopeful Bernie Sanders, is advocating for free tuition at public colleges and universities throughout the country. McCaskill said that sounds great, but isn’t “pragmatic, practical and realistic.”

“There’s a lot we can do to make college more affordable,” McCaskill said, adding there’s nothing wrong with the idea, but noted it would be very hard to do that and afford it. “To add further to [the country’s] debt without being realistic about what it would cost Americans to pay for that, I think it would be better to focus on programs like the A+ program in Missouri, where if you work hard and do well, we’re going to take care of your first two years of school.”