Royale beginnings on the horizon 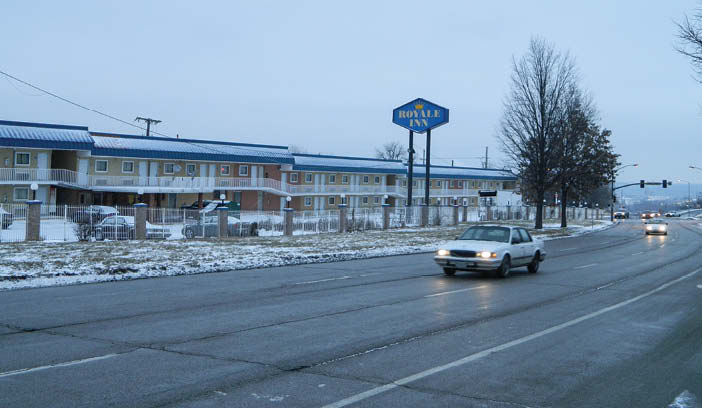 Royale Inn. The city hopes to own the land where the Royale Inn sits by this summer. Michael Bushnell

KANSAS CITY, Missouri — It’s not often committee meetings end with a round of applause.

But at the end of last Thursday’s Transportation and Infrastructure meeting, residents of Kansas City’s Historic Northeast couldn’t contain their excitement. The committee unanimously approved an ordinance to enter into negotiations for the purchase of the Royale Inn Motel, located near the intersection of Paseo and Independence. Once purchased, the city would demolish the motel.

The ordinance authorizes the city to allocate up to $2.7 million for the acquisition and eventual demolition of the aging motel. The price tag includes all clean-up assessments. The ordinance advances an option originally signed last March by Brinshore Development LLC., to acquire the property from the current owner, DevRam LLC. The full council later unanimously approved the ordinance at the city council meeting.

The committee noted that the area would eventually become the right away for the Paseo Gateway. The acquisition of the motel property is a strategic point in the Paseo Gateway Plan that is set to revitalize the Paseo Boulevard from the I-35 exit ramp all the way down to Truman Road, creating a true gateway to Kansas City’s urban core.

Don Frank, manager of acquisition and relocation services for the city’s capital projects department, told the city he believes everything could be wrapped up by mid-April. However, the committee approved a June deadline for the acquisition of the motel.

The final purchase cost of the Royale Motel is for $1.8 million from Devram LLC. The council authorized up to $900,000 in additional funds for environmental clean-ups, demolition, asbestos removal, and any other costs that might arise.

Jessica Ray, president of the Pendleton Heights Neighborhood Association, spoke at the committee meeting, noting she’s been told the motel would come down years ago. Residents of the Northeast were given hope in 2015 when Kansas City University purchased and demolished the Motel Capri. With one down, Ray said she looks forward to not seeing Royale Inn sign as she drives along the Paseo.

“This is an amazing opportunity to get something done,” Ray said.