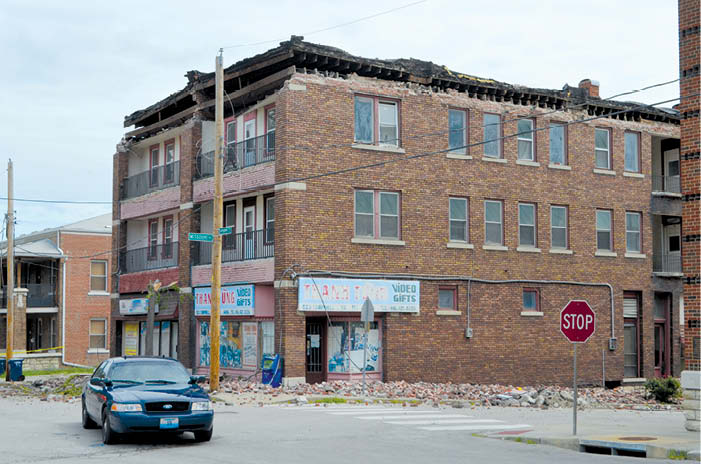 KANSAS CITY, Missouri – A Columbus Park structure at 523 Campbell has been targeted for demolition after parts of its front facade collapsed onto a parked vehicle on the morning of Wednesday, July 6. No one was injured, but a white sedan was crushed by falling brick at around 9:00 a.m. when the Columbus Park building partially collapsed.

The structure, located at the intersection of Campbell and E. Missouri Avenue, was taped off by KCFD and KCPD officials shortly after the collapse. No one was in the white sedan at the time of the incident, although the vehicle was significantly damaged by the falling debris.

In an email sent that evening, KCMO Communications Director Chris Hernandez informed media that the building had been declared an emergency because of the “immediate threat of further collapse and imminent danger to the health, safety, and welfare of the public.” The specific issues cited in the decision included wet rot deterioration of the floors and the area of masonry being “severely out of plumb” and on the verge of collapse.

The city announced on July 7 that demolition prep work was already underway. Additionally, the city indicated that the property had been the subject of three property nuisance cases since 2008. The first occurred in June of 2008, and was related to water being diverted onto a neighboring property. That case was closed in July of 2009. The second case opened in June of 2013 and initially involved trash and weeds, but an inspection uncovered 15 further violations – including the building not being structurally sound, rotting boards, peeling paint, the ceiling in disrepair, and floors in disrepair. After multiple summons and callbacks, the violations were ultimately abated and the case was closed in November of 2015. The third case, first related to trash and broken windows but later expanded to include a collapsed retaining wall, was opened in February of 2016. That case was still pending at the time of the collapse, with a court date scheduled for August 4, 2016.

The owner of the building, Thuan Tran, indicated on Wednesday morning that he had scheduled a roof repair with an area contractor before the collapse. Reached by phone on Thursday morning, Tran declared his intention to get a second opinion on the structural integrity of the building, with an eye on saving the more than 100-year-old historic structure.

“I am in the mode of complete renovation. If I cannot do it, then yes, demolish it of course,” said Tran. “One guy said he couldn’t do it, but it was only his opinion. The city said that if nobody can brace the walls, then the building will have to come down.”

Tran further claimed that he’s recently been investing in the building – putting in all new electrical and replacing the water pipes. At the time, he was still holding out hope that the city would agree to allow him more time to investigate options other than demolition.

“It’s 100 years old; it needs to be cleaned up and put back together with code requirements. I hope it will last another 100 years,” said Tran. “Everything needs to be safe and nice, and that’s really what I want.”

On the afternoon of Thursday, July 7, however, Tran agreed to make private arrangements to tear down the historic building. Demolition work began on Friday, July 8.

The partial collapse occurred near the roof of the three-story building, with brick and debris falling three stories onto the sidewalk and a pair of vehicles parked on the street in front of the building. The second vehicle, a dark red Honda CRV, was also within the collapse zone and incurred damage around the hood of the car. The owner of the second vehicle was identified, and authorities obtained the keys sometime after 10:00 a.m. on July 6. They were able to get into the vehicle and move the CRV out of harm’s way.

Thanh Diep works at the Thanh Tung video store/travel agency that is located at 523 Campbell, on the first floor of the now-dangerous structure. He said that the other two stories of the building were unoccupied, and told the Northeast Newsthat he’d previously voiced concerns about the building’s structural integrity with the landlord.

“I just pointed out that brick were sticking out of the building,” said Diep. “I was surprised; I didn’t think it would be this soon.”