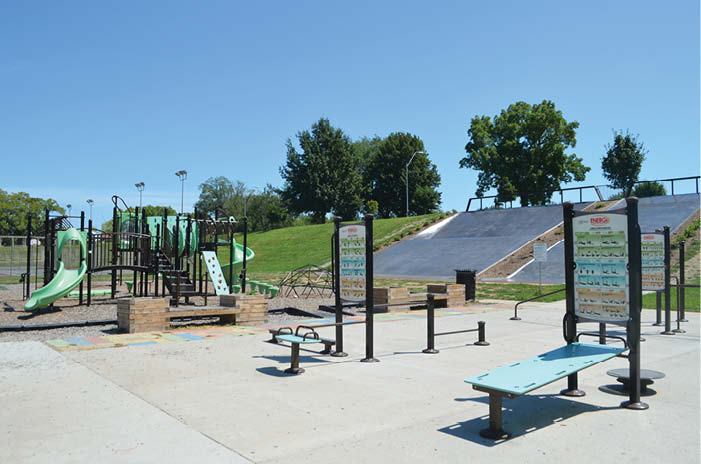 Kessler. The playground and embankment slide at Kessler Park have been a boon for the community, and thanks to a new $15,000 grant, there will soon be a new mini playground for younger children between the ages of two and five. Paul Thompson

KANSAS CITY, Missouri – By the end of July 2017, Scarritt Renaissance neighborhood’s Kessler Park will take yet another major step forward.

“The amazing thing about this project is that it has done even more than what we ever dreamed,” said Leslie Caplan of the Scarritt Renaissance Neighborhood Association. “It has brought people of all nationalities and economic situations together beyond our imagination.”

KaBoom saw the need for a new playground in the Northeast area and reached out to Dr. Pepper and Snapple to fund the creation of a new and improved area for children to get plenty of exercise. Tracy Gardner, a resident of Scarritt Renaissance, wrote the grant for the neighborhood.

“KaBOOM! is like a middleman,” Gardner said. “They find sponsors and then we all have weekly phone conferences to determine all the details of the playground.”

The playground Scarritt Renaissance was awarded is going to be a community build project. Like the first KaBOOM! playground, the new playground will be constructed with just a single day of hard work. Of course, the project will require lots of help from area volunteers. The neighborhood association will soon be having a committee meeting to determine when the building process will begin on the new playground.

“We do some prep work for two days beforehand, but the real build starts about 8:00 a.m. on a Saturday morning and is finished by about 5:00 p.m. that day,” Caplan said.

KCMO Parks and Recreation has been a major help to the Scarritt Neighborhood Association, teaming up to fix any issues with the playground that has already been constructed at Kessler Park. They have been a major partner in the community’s efforts to enhance the park.

Unfortunately, the playground has had multiple issues with vandalism. On July 22nd, someone drove their truck over the wooden landing zone of the park’s embankment slide, damaging multiple boards. On July 27, someone tagged the playground and the slide was keyed. KCMO Parks and Recreation has agreed to clean up the playground, replacing the damaged boards and potentially putting up a barricade that won’t be dangerous for children. The Scarritt Renaissance Neighborhood Association has also purchased four cameras to protect the playground and the entire park.

“The reality is that we will not be deterred and we will remain true to our goal of providing space for our community to enjoy healthy play,” said Caplan.

In an effort to ensure the safety of all children who play on these playgrounds, SRNA recently received a grant from the Neighborhoods Rising Fund for traffic calming along Gladstone Blvd. The committee responsible for making the boulevard safer plans to create something visually striking to deter drivers from speeding.

The date for building the new playground is still yet to be determined, but it is certainly something for the Scarritt Neighborhood – and the rest of the Northeast – to look forward to.