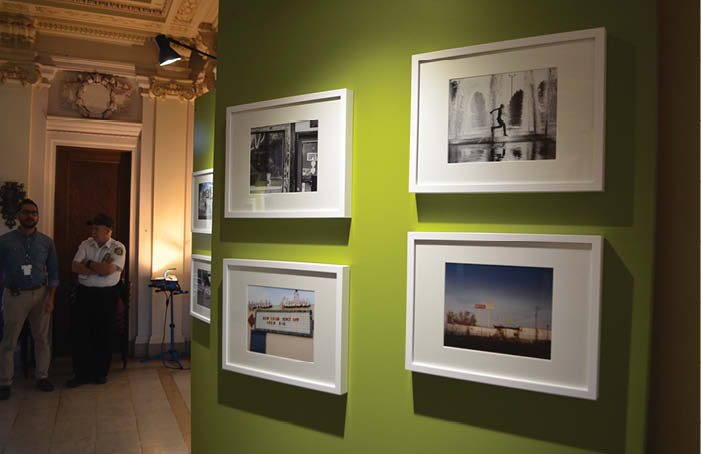 Snapshots. The photography work of Bryan Atkinson will be on display at the Kansas City Museum until October 15. Paul Thompson

KANSAS CITY, Missouri – Bryan Atkinson has ably meshed his love of photography with a fascination for the Historic Northeast in a new Kansas City Museum exhibit entitledPassing Me By: Snapshots of Northeast, 1996 – 2016, which debuted at the museum on Saturday, September 17.

Atkinson spent summers and weekends in the Northeast during his formative years, and he says that it was the area’s unique qualities that initially led him to document the neighborhood on camera.

“My grandparents have lived here since the 1950’s, and both of my parents were raised in the Northeast. I’ve always sort of been in the Northeast,” said Atkinson. “To me, it’s just a unique part of Kansas City that is just unknown to so many people. I’ve always just felt that it’s this hidden gem.”

Atkinson thinks of himself as a street photographer, and says that most of the photographs in his exhibit were taken during walks or drives through the Northeast. Atkinson added that he shoots in both black and white film and with digital cameras, and that his jaunts often draw his eyes to a particularly striking structures or moments.

“I’m just out on the street seeing what happens,” Atkinson said. “I may or may not know what I’m going to do with it. I just shoot it.”

“Sometimes it’s kind of a spray and pray method,” he added. “Since I’m using digital cameras more frequently, I’m not worried about how much it’s going to cost me.”

Kansas City Museum Recreation Director Paul Gutierrez says that he became familiar with Atkinson’s work, of all places, through the social media app Instagram. The photographs portraying the Northeast gave Gutierrez an idea.

“I manage the museum’s social media accounts. I saw Bryan tagging us for his photography work, and I just reached out to him via Instagram,” said Gutierrez. “It was a great connection to make. He gave us about 30 photos of the Northeast, and I think they cover all six neighborhoods of the Northeast.”

Gutierrez added that Atkinson had already sold several pieces during the first day of the exhibition, which was a pleasant surprise for the photographer.

“I went into it with the expectation that this was probably not a moneymaking venture, but that it was more about getting people into the museum,” said Atkinson. “I was excited to sell a couple of pieces.”

The exhibit will remain on display until October 15, when the museum is scheduled to open its exhibit about the history of the Kansas City, Missouri Fire Department, entitledIn the Line of Duty: A History of the Kansas City, MO Fire Department from 1868-1968. Those interested in seeing Atkinson’s work for themselves can do so Wednesday through Saturday from 10:00 a.m. until 4:00 p.m.

“They can just check in at the Carriage House if they want to see the exhibit, and then we’ll walk you in,” said Gutierrez.