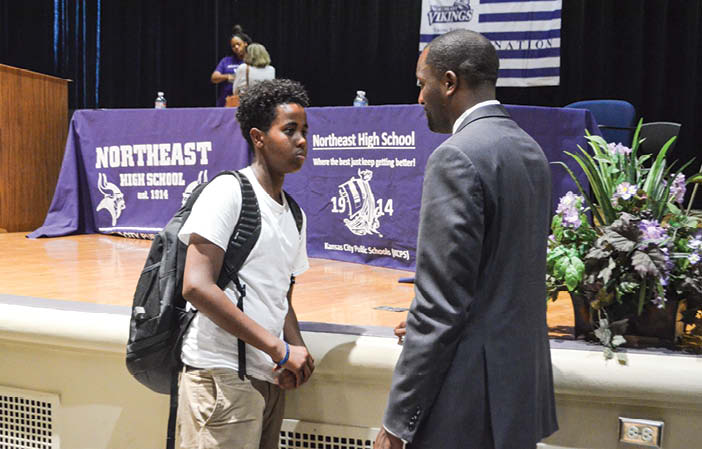 Bedell stopped by Northeast to discuss the importance of attendance and positive mentorship during an afternoon assembly on Tuesday, August 30. The high school is rolling out a new mentorship program, called My Brother’s Keeper, to pair up members of Northeast’s freshman class with strong role models from the community who will help them attend class regularly and excel academically. Students will be divided into four tiers based on attendance rates, and mentors will be expected to meet with their assigned students no less than once a month.

Following a powerful medley from saxophonist Dr. Brandon McCray, Bedell stepped onto Northeast’s auditorium stage and, in front of hundreds of students and faculty, offered frank thoughts about the importance of hope and the key role that positive mentors played in his own life.

Admitting that the musical performance struck an emotional nerve, Bedell revealed devastating personal details about his life, up to and including the recent death of his younger sister. Bedell told the assembled students that his sister, who had been missing since late May, was found deceased outside of Rochester last Friday. He and his family still don’t know what happened to her.

The tragic loss of his sister isn’t the only heartbreak Bedell has had to endure. The oldest of eight siblings, the KCPS superintendent revealed that his next-oldest brother was charged with murder just last year. While his brother beat the charges, Bedell acknowledged that without a high school diploma, he doesn’t have many options when it comes to supporting his six children.

“The brother below him got shot in a drive-by when he was 17. The next brother below him is an alcoholic. He was onJudge Mathislast summer because of not paying child support. The next one after him is the sister that we just found her body last Friday,” said Bedell. “Then I have another sister right after her, and she dropped out too. She’s not doing much with her life. I have a little brother; he’s in the streets. Then I have my youngest brother: he’s been in and out of jail since he was 16. He doesn’t care about dying – he’s out there robbing gang members and drug dealers.”

Bedell would go on to describe his own difficult childhood, along with the story of the mentors who helped him carve out a better path for himself. As he explained, life was not easy during his formative years. His mother abused drugs. Bedell told the story of a job he got early in high school, working as a janitor for $4.25 an hour. His first paycheck was for just over $63, and his mother told him that he needed to hand it over for rent.

Instead of giving the money to his mother, he went to the store to purchase groceries. When he returned, his clothes were being thrown out the window. Bedell confided that from there, he slept in a nearby abandoned car for several days.

“Learning is a struggle, because I’m trying to figure out where I’m sleeping at night,” said Bedell. “I don’t have a home to go to.”

He stayed with a friend for a few nights, then with an aunt for a few months. Eventually he settled in his grandmother, with whom he lived for the majority of his final three years of high school. While his living situation had improved, Bedell admitted that he was still struggling in school. He started skipping class, missing assignments, and was ultimately forced to miss six basketball games for his varsity team due to ineligibility. At his time of greatest need, however, a mentor arrived.

“My homeroom teacher saw my progress report,” Bedell said. “He pulled me to his desk and said, ‘Mark, there’s a lot of pain and suffering going on in your life. You have an academic gift that you don’t even know that you have, because your guard is up.'”

The teacher added that young Mark was quick-tempered, eager to fight, and hesitant to listen. While Bedell was initially upset at the forward words, he went back two weeks later and told the teacher about all of the hardship he’d been enduring. Along with another teacher Bedell had confided in, this teacher became a positive role model in his life.

“They made me believe that I could do more than I ever thought I could do,” Bedell told the Northeast students. “I started making the Honor Roll, I got my GPA high enough to where I didn’t become ineligible anymore, and then I was eventually able to apply to colleges.”

Looking back, Bedell recognizes the importance that those teachers – as well as the public school system in general – had on his life trajectory. He then pleaded with the assembled students to take advantage of the same tools that allowed him to escape his hardscrabble youth in Rochester.

“Had I not taken advantage of what the public school system had for me, there’s no way I’d be standing in front of you and having this conversation. Many of you have a story like mine,” said Bedell. “As I close out, I want you all to know this: I have high expectations for you. You’re not allowed to skate; you’re not allowed to be cheated out of an education; you’re not allowed to take it easy. Our teachers are going to hold you highly accountable.” 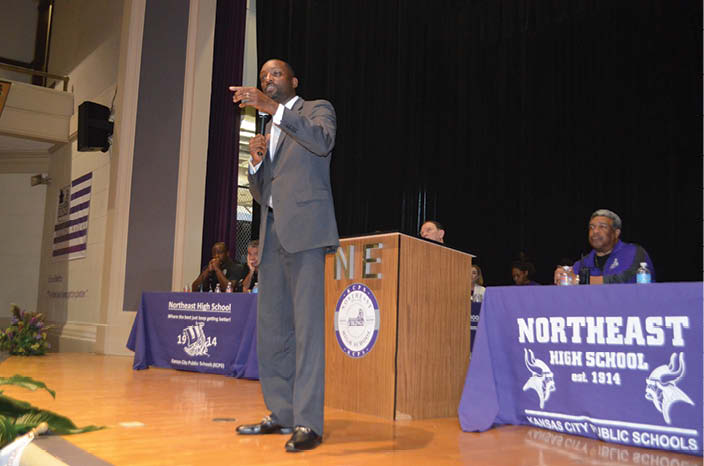