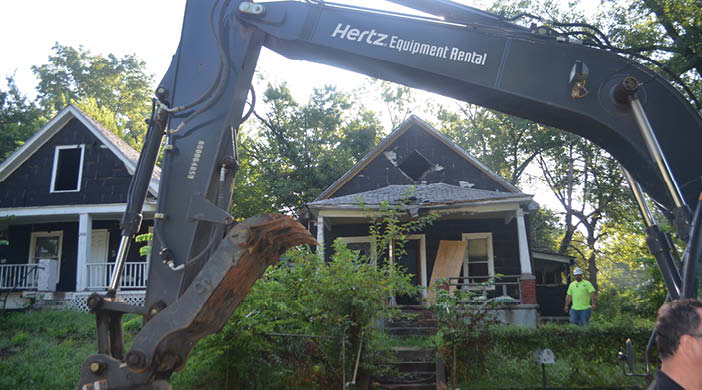 Demolitions. Two houses in the 2000 block of Chelsea were taken down on Tuesday, August 9. Paul Thompson

KANSAS CITY, Missouri – Northeast residents can expect to see some of the area’s dangerous buildings demolished over the next several months.

Earlier this summer, the city of Kansas City, Missouri announced an ambitious Neighborhood Revitalization Plan that would ensure that all 800 structures on the city’s Dangerous Buildings List are demolished over a two-year span. This plan was initially implemented on Thursday, June 2, with the demolition of a city-owned structure at 6001 Troost Avenue. The city followed that project by demolishing the former Manchester School on Truman Road.

On the morning of Tuesday, August 9, the city moved into the next phase of its revitalization plan: demolishing abandoned homes in urban-core neighborhoods. Construction crews tore down two blighted homes in the 2000 block of Chelsea Avenue. The pair of dangerous structures represented the first of 23 homes set for demolition over the next two weeks.

More dangerous structures in the Northeast are expected to be targeted for demolition before winter. According the KCMO’s interactive map of dangerous buildings, nearly 100 structures are classified as dangerous between Gladstone Blvd. on the north, Truman Road on the south, The Paseo on the west, and 435 on the east.

An aggressive timeline for the demolition projects has been made possible thanks to the assistance of Kissick Construction and Industrial Salvage and Wrecking. Kissick has spearheaded a plan to demolish 61 dangerous structures for the city over the next several months, while Industrial Salvage and Wrecking will be demolishing four additional dangerous buildings. All of the 65 demolitions will be provided at no cost to the city.

“Jim and his group are donating – I want to make sure that’s clear – they’re donating work on 61 demolitions. When you look at the average cost of a demolition, and what they’re doing, it’s pretty easy to see that they are really helping the city and saving us a ton of money,” said James. “We didn’t ask them to do this; they volunteered to do this on their own. I think that shows exactly what sort of corporate citizens we have in Kansas City.”

City Manager Troy Schulte broke down exactly how much money the donated demolitions are expected to save the city.

“The context of taking down 65 houses means we won’t have to spend about $600,000 that we would have otherwise had to spend on a traditional contract process,” said Schulte.

Jim Kissick of Kissick Construction said after the press conference that he plans to partner with construction companies throughout the city to help provide the free demolition work. For the first batch of dangerous buildings, he’s enlisted the help of Blue Nile Contractors, Garney Construction, Hettinger Excavating and Demolition, Mark One Electric, O’Donnell & Sons, Max Rieke & Brothers, Site Rite Construction, Superior Bowen Asphalt, and Houston Excavating in addition to Industrial Wrecking. He added that Kissick Construction will make up for any demo work that isn’t picked up by other companies.

“When we contacted the city on this go-around, I said that I’m going to reach out to the other contractors in our industry,” said Kissick. “My goal would be to ask each one of those guys to do two houses. We’re going to do 61; if for some reason I only get 25 guys to do two, we’ll pick up the other 11.”

Kissick noted that the demolition work will be completed in groups of roughly 20 homes at a time. Kissick said he expects to get the next batch of homes within roughly 30 days, after the first group of 23 demolitions is complete. He added that the 61 dangerous buildings should be demolished within the next 75 days, but it’s still to be determined precisely how many will be located in the Northeast.