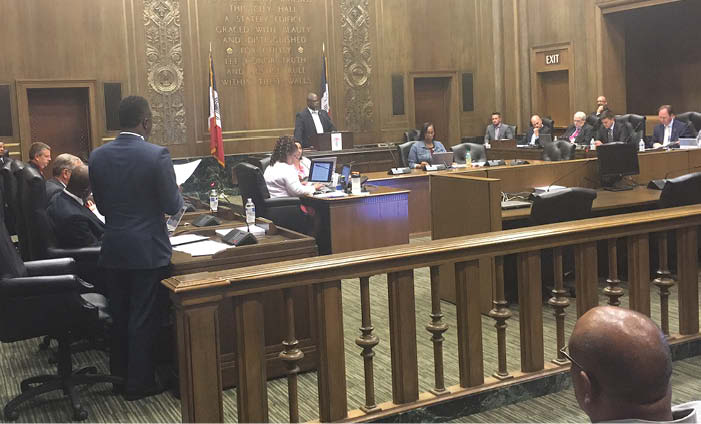 KANSAS CITY, Missouri – After 49 days of discussion, an amended version of the 18th and Vine Historic District redevelopment plan earned unanimous approval from the KCMO City Council during its Thursday, July 14 legislative session.

The new proposal includes a $7 million city investment in Phase I of the project, instructs the city manager to pursue the creation of a Community Improvement District, calls for the council to hire an experienced property management firm to manage the project, and allows for one-third of scheduled debt service payments for Phase I to be paid by 3rd District in-district funds. The amended ordinance also recognizes that Phases II and III of the project remain “equally essential to the economic vitality” of the district. Despite this direction, no concrete funds are explicitly set aside under the amended ordinance, which allows the council to pursue alternative funding options for those phases.

After failing to bring the original $27.6 million plan to a vote during the July 7 legislative session, the City Council spent the past week working diligently on adjustments to the revitalization plan. Ultimately it took private discussions, a Friday, July 8 Council retreat, and a Tuesday, July 12 work session to bring the council to a consensus. By the Thursday legislative session, the full council was on board with the amended proposal.

Mayor Pro Tem Scott Wagner thanked the council for their patience and diligence as they worked to find common ground regarding the 18th and Vine District plan.

“I think over the past 49 days I have raised a number of questions, presented a number of concerns, and asked our colleagues, and particularly Councilman Reed, for his indulgence as we try to work through this,” said Wagner.

Wagner further commented on the importance of making every effort to leverage private investment in the entertainment district.

“In order for us to invite that private investment…you have to show that the city is actually willing to make an investment in the area where we’re asking private development to come into,” Wagner said. “That’s what this development does.”

While the amended ordinance still includes many facets of the plan’s initially-proposed first phase, it also includes triggers for future phases that require leveraged funds, business plans, receipts of proposals that meet the city’s goals, and commitments for capital funds from private entities. If those triggers aren’t hit, there appears to be no guarantees that future phases will proceed unimpeded.

The amended ordinance will still transfer several properties into city control. In fact, the only buildings in the district that won’t be owned by the city are The Call’s headquarters, the Mutual Musicians’ Foundation, and the Lincoln Building, which houses the Black Economic Union of KC. The ordinance also creates an oversight committee – filled with both public and private stakeholders – that would manage the district. Such a committee was already structured in 2014, but was not put in place at the time because the city did not own all of the properties in the district. That committee will operate much in the same way as the City Market oversight committee does.

3rd District Councilman Jermaine Reed, who sponsored the ordinance, expressed cautious optimism ahead of the legislative session that the amended ordinance would be passed.

“I’m hopeful that this is something that everyone on the council can agree on,” said Reed during the July 12 work session. “We wanted to come to the council with a proposal that maybe we can discuss and talk through.”

On Thursday, Reed credited 5th District Councilwoman Alissia Canady for her conciliatory efforts during the council’s Friday, July 8 retreat, citing that sit-down as a crucial moment in 18th and Vine talks. For her part, Canady credited Mayor Sly James for challenging the council to collaborate on an agreement that would keep support from being divided by district or racial lines.

“This should not have been a divisive issue,” said Canady. “I thank you for being assertive and aggressive, and challenging us to really come together and work.

Prior to the unanimous vote of approval, Mayor James concluded discussion of the ordinance by praising the agreement reached by the council.