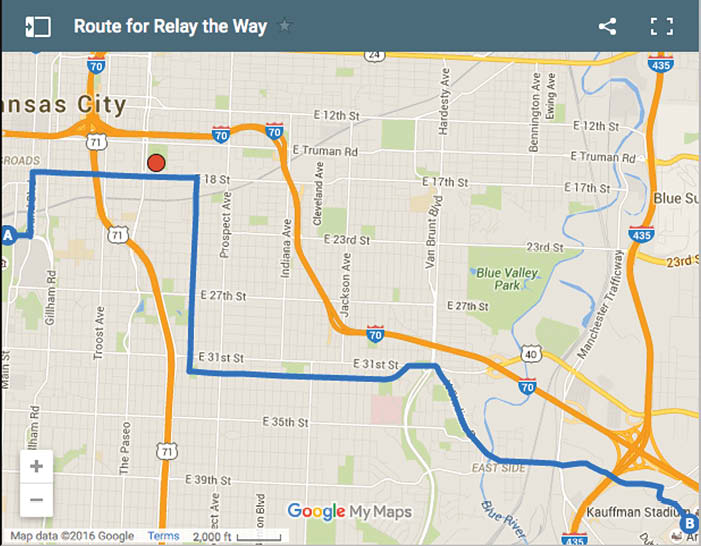 Record pitch. In an effort to raise money for the incoming Urban Youth Academy, baseball fans can purchase a spot in line for the longest recorded opening day pitch. Submitted Photo

“Relay the Way,” is being organized by the Fundraising Committee for the Kansas City MLB Urban Youth Academy in partnership with the Kansas City Royals, the Greater Kansas City Sports Commission and VML. More than 2,500 fans are expected to join the relay to throw a baseball along a 10-mile route from Kansas City’s Union Station — the site of the city’s historic World Series Championship rally — to Kauffman Stadium, the home of the Royals, signifying the power of baseball to connect an entire community and make a positive difference for our youth. Relay the Way will conclude on the pitching mound at Kauffman Stadium prior to the Royals vs. Mets home opener, which will be broadcast nationally on ESPN. The telecast includes a championship-flag-raising ceremony honoring the Royals’ 2015 World Series Championship.

Spots on the relay route, spaced approximately 20 feet apart along the route, are available for a minimum donation of $30 and can be reserved and purchased online at www.relaytheway.com. Participants will receive a commemorative T-shirt and proceeds will support the Kansas City MLB Urban Youth Academy, which will break ground at Parade Park near Kansas City’s 18th & Vine Jazz District later this year.

“’Relay the Way’ is an opportunity for the people of Kansas City to take to the streets in support of programs that will ensure our status as the best baseball town in America for many years to come,” Moore said.

“The Kansas City MLB Urban Youth Academy offers our city the opportunity to use baseball and baseball-related life and job skills to rebuild the heart of our community by serving the young people who live in the urban core,” James said.

The Kansas City MLB Urban Youth Academy will be the seventh Urban Youth Baseball Academy in the United States. It will be developed and operated by Kansas City Urban Youth Academy, Inc., a nonprofit organization that will enter into an agreement with the City to construct, maintain, and operate the facility at Parade Park. The Academy will include four new, state-of-the-art diamonds, an indoor training facility and other improvements to enhance the area bounded by Truman Road, 18th Street, The Paseo and Woodland Avenue.

The Academy’s initial goal will be to serve approximately 800-1,000 youth per year, between the ages of 6 -18. In addition to providing free, year-round baseball and softball instruction and play, including hosting tournaments, coaching clinics and skills camps, the Academy will provide youth with access to tutoring programs, college prep classes, college and career fairs, financial literacy and internship programs, courses teaching math through the use of baseball statistics and MLB industry alternative career workshops. Youth will also have opportunities to be involved in drug resistance and gang-prevention programs and healthy lifestyle classes.