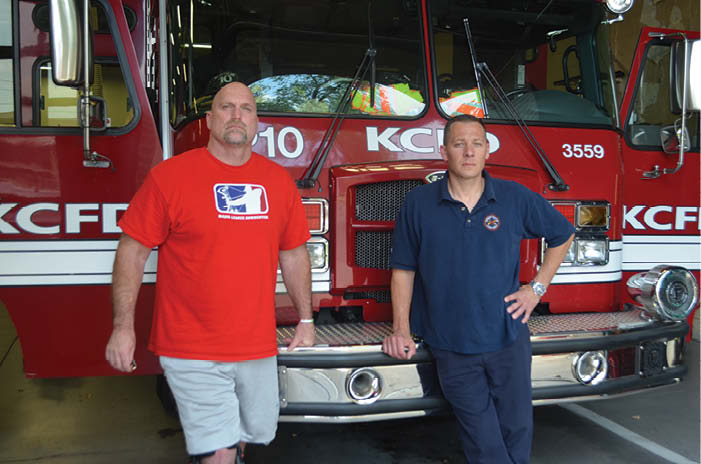 Scholarship. Jim Mesh (left) and John Sirna (right) are working together to host a trap shoot on Friday, August 5, to raise money for their new non-profit, the John V. Mesh Memorial Scholarship. The non-profit will focus on conservation. Paul Thompson

Aside from family and the Fire Department, those close to fallen KCFD firefighter John Mesh say that being in the great outdoors was his greatest passion in life.

That’s why close friend and KCFD Pumper 10 Driver John Sirna has teamed up with John’s brother Jim Mesh to create the John V. Mesh Memorial Scholarship, a non-profit “dedicated to sponsoring learning opportunities for children and scholarships for those interested in a profession in conservation.”

The first fundraiser for the non-profit will be a sporting clay shoot, which will be held on Friday, August 5 at Powder Creek Shooting Park in Lenexa. In addition to the clay shoot, the event will also include food and drink, a raffle, and an auction. The cost to participate is $165 per shooter, and the organizers are also seeking out corporate sponsorships and donations of auction items. While Sirna and Mesh have acknowledged that the red tape required to get the ball rolling on the non-profit has been significant, they can now see the light at the end of the tunnel. Sirna said that there’s one central motivation that’s been driving their efforts.

“Carrying on John’s legacy, by far,” said Sirna. “The red tape and everything is what it is. As long as we can have something carrying on his name, it’s satisfaction enough.”

According to Jim, preservation of the outdoors was the perfect cause to attach to his brother’s name.

“My father had us in the outdoors since we were old enough to walk,” said Mesh. “I remember going rabbit hunting when I was a kid, with a stick. I didn’t even have a gun to shoot. John was the same way, and he’s passed it on to his kids, too.”

The non-profit’s first partnership will be with the Missouri Department of Conservation. The John V. Mesh Memorial Scholarship will sponsor entry into the Discover Girls Nature Camp, a weekend in the woods for girls ages 11-15.

“They have roughly 25-30 girls that they send out for a weekend of camping to teach about camping and outdoors. Whatever we can donate to go towards that is our goal,” said Sirna. “John was very passionate about the outdoors, and when I came across this nature camp it seemed like a perfect fit. John had four young daughters, so it was kind of like an omen.”

According to Jim, John passed on his love of conservation to his daughters, making the Discover Girls Nature Camp a logical initial partner. But the organization won’t stop there: they are also reaching out to universities who have conservation programs, in the hopes of providing scholarships to students with an interest in the field.

Mesh and Sirna are currently reaching out to organizations to sponsor the August 5 clay shoot. Those inquiries have included the Kansas City Royals, the Kansas City Chiefs, Argosy Casino, Bushnell Optics, and even rock singer Ted Nugent, who Mesh says has committed to sending along signed memorabilia for the auction.

“Ted Nugent is a big bow hunter. He’s got a show calledThe Spirit of the Wild, and they said they’d get him to autograph some stuff and send it in,” said Mesh.

While sponsorships and donations have already begun trickling in, there is still room for interested parties to participate in the August 5 clay shoot. Mesh told theNortheast Newsthat the organization is looking to limit the clay shoot fundraiser to roughly 75 participants. To register, or to donate to the scholarship fund, email jvmmemorialscholarship@gmail.com.