Inn at 425 offers many opportunities to explore NE 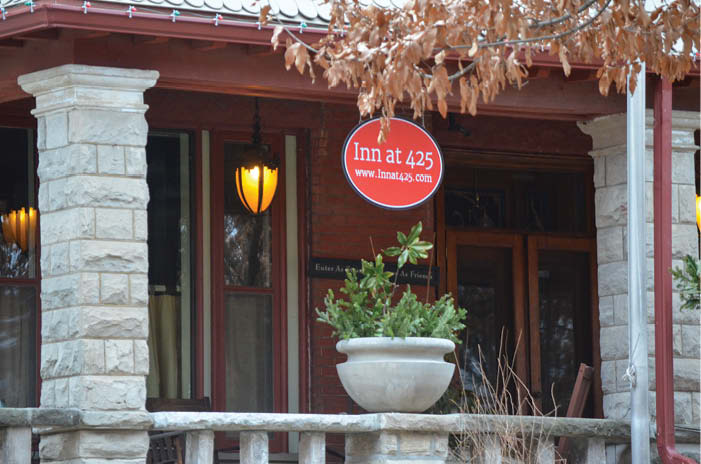 Always Inn. The Inn at 425 was the recipient of the 2009 Kansas City Beautification Award and has been featured in numerous magazines. Joe Jarosz

KANSAS CITY, Missouri — When your bed and breakfast gets lumped into groups with Kansas City’s best hotels, you know you’re probably doing something right.

Recently, the travel website theculturetrip.com, ranked the top 10 hotels to stay in if you’re visiting Kansas City. At the top of the list was The Raphael Hotel, a luxury hotel located next to the Country Club Plaza. Next on that list, Northeast’s own Inn at 425. Rounding out the remaining slots were hotels downtown and in Westport, with a few more bed and breakfasts sprinkled in, as well.

“Not a bad hotel to follow,” Stephan Zweifler, who co-owns the inn with Carl Markus Jr. said.

This isn’t their first foray with notoriety, either. Zweifler noted the inn has been the subject of numerous articles written for the Kansas City Star, as well as featured in magazine like Midwest Living Magazine and House and Garden Magazine. Read any reviews on their website, Innat425.com, or on tripadviser.com and one can see why the inn located at 425 Gladstone Boulevard is so popular. Zweifler likes to think its their customer service that makes the inn stand out.

“We’re very serious about our guests and their comfort and making sure they have an extra special experience,” Zweifler said.

Zweifler said he and Markus got into the business of being inn keepers because they wanted to be in keepers. When they became owners of the home nearly 20 years ago, they didn’t turn it into an inn out of necessity, something Zweifler believes a lot of inn keepers do when they purchase a historic home. He said he understands how people can get burned out waiting on strangers in your home.

“That can be exhausting,” Zweifler said. “We love that. We’ve lived in the neighborhood for 25 years. We’ve always been on homes tours and always open our home to different charity events because we like having people here, meeting new people and meeting new friends.”

By turning their home into an inn, Zweifler said it was also their way of giving back to the Northeast community.

“We believe so strongly in the Northeast,” Zweifler said. “We wanted to prove that these big houses could be used gently as an adaptive re-use and make them viable and beautiful again and bring awareness to the outside world that this is a wonderful place to stay.”

A majority of their guests travel from within a 50 mile range. Many of these guests on their “staycation” haven’t ventured downtown or to the Northeast in years, if at all. After these guests check-in, Zweifler said the first thing he asks them is if they have dinner plans. If they don’t, he’s quick to suggest Northeast options.

“We solely support and recognize locally owned restaurants,” Zweifler said, adding The North End is always a popular spot for guests. He also noted special relationships between the inn and Knuckleheads and Garozzo’s. And that support isn’t one-sided. Zweifler noted the inn has a lot of verbal support from within the Northeast community.

Although business has been a little slow to start off the year, Zweifler said the inn already has reservations through the end of June. The inn is not only one of the sponsors of this weekend’s Old House Expo at the Kansas City Museum, but it’s also playing host to the keynote speaker, Bernice Radle. She is the owner of Buffalove Development and co-host of the DIY TV show American Rehab: Buffalo.