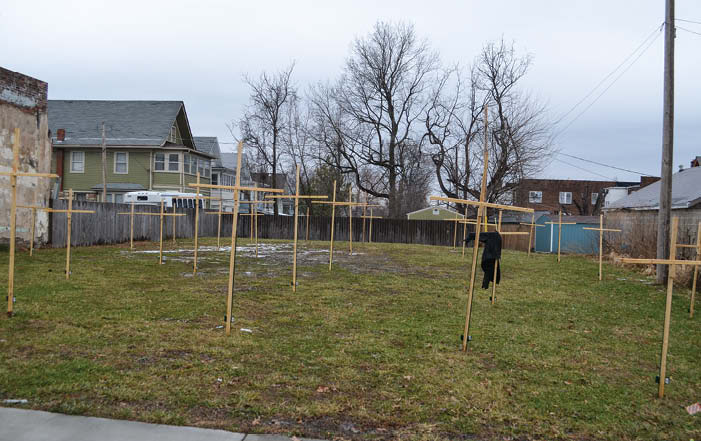 Crosses to share. During the Christmas season, Healing House used these crossed to give away winter essentials to the needy in the neighborhood. Joe Jarosz

KANSAS CITY, Missouri — If you’ve driven along 4600 block of St. John Avenue recently, you may have noticed 30 crosses in an open lot next to Healing House.

They were used to help keep people warm.

Shortly before Christmas, someone shared a story with Bobbi Jo Reed, founder and director of Healing House, Inc. Someone told her how people were putting scarves on poles throughout the inner-city with a note saying “I’m not lost, I’m found for you and if you need me take me.” She thought that was a cool idea and set-up 30 crosses in the lot next to their meeting hall and proceeded to hang coats, stocking, scarves and things like that on Christmas day.

“We refilled them out at least three times, so nearly 100 items went out,” Reed said. “We had people come up without shoes on and we have a community closet downstairs so we grabbed more items for them.”

Every Christmas, Reed noted, a donation basket is passed around the meeting hall. Once enough money is collected, supplies are purchased for the homeless community.

“I used to be homeless and so it’s always been part of my mission and heart to recognize people who feel hopeless out there,” Reed said, adding they deliver these packages to people who can’t make it to shelters. “One of the biggest things I can give people who live here is a servant’s heart. When you’re paying it forward, you’re getting your cup filled.”

For those unfamiliar, Healing House, Inc. is a faith-based substance abuse recovery organization, working to provide safe and stable homes, with opportunities for spiritual and personal growth, along with purposeful guidance and support, for men and women who are committed to overcoming their addiction and becoming responsible, productive, drug and alcohol free members of our community.

With the holiday season behind them, Healing House is now ready to embark on its next mission; a $3.3 million capital campaign to build a new fellowship hall next to the current structure at Elmwood and St. John Avenues. Reed said the original idea, before the lot was acquired in late 2014, was to renovate the current building.

“But our community has grown so much that we’ve outgrown it by leaps and bounds,” Reed said.

With a ground breaking anticipated for this spring, the new meeting hall will increase the capacity for daily group meetings, meals, prayer and recovery efforts from about 100 people to more than 250. Offices would be located upstairs. The plan, she said, would then be to remodel the current space to house a thrift shop, café and catering business with a commercial kitchen, and a produce market. The Healing House businesses will provide jobs for residents.

“It’s hard to get fresh produce in this area so this would be an ongoing thing for the area all-year round,” Reed said.

The second floor of the remodeled fellowship hall will be remade into new apartments. A construction planning team is currently at work with multiple engineers and contractors on the design.

Being part of the community

Ever since her arrival in the area 17 years ago, it’s been a goal of Reed’s to make the Northeastthrive again and be a safe place for everyone to live. If the weather is nice, she said members of Healing House will walk up and down the streets to help beautify the neighborhoods.

“It’s about being part of this community and being helpful in this community,” Reed said. “We try to take care of our neighbors.”

In the nearly 20 years, she also said she never imagined growing to such heights. She’s excited not just for the future of Healing House, but for the Northeast, as well.

“It’s a beautiful community and I love the diversity,” Reed said. “I think we’ve established a good relationship and reputation in this community and we try to participate as much as we can. This is exactly the community God wants us to be in because we need to be in the heart of the issue. I see it ever changing and becoming a better place and I’m honored to be a part of it.”