Graffiti once again popping up throughout NE 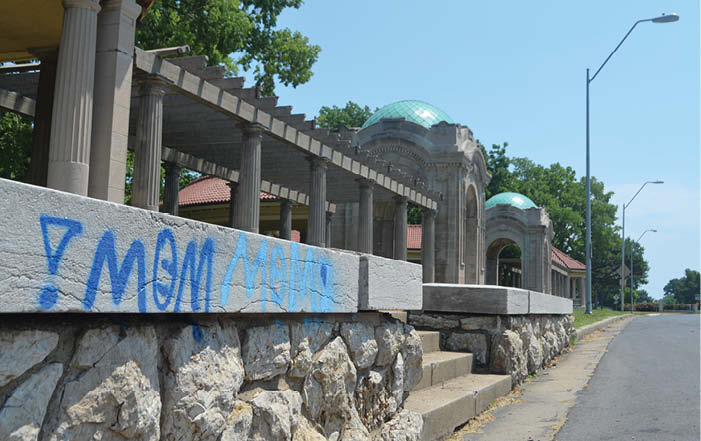 Graffiti. Although a recent tag at The Concourse was swiftly removed by city staff, the rash of graffiti in the Northeast this summer is causing consternation. Paul Thompson

KANSAS CITY, Missouri – Northeast residents are growing tired of the ever-increasing bouts of graffiti in the area, and they aren’t alone. Parks and Recreation maintenance crews and KCPD officials have also noticed the trend, and they’re just as frustrated as anybody by the repeated vandalism.

Parks and Recreation maintenance supervisor Louis Cummings oversees the two-man crew whose primary job is removing graffiti throughout the central district of Kansas City. The central district encompasses a giant swath of the city: north from the Missouri River, south to Brush Creek, and all the way to the city limits to the east and west. Cummings told the Northeast News that the vast majority of the crew’s time is spent right here in the Northeast.

Cummings added that Parks and Recreation spent roughly $10,000 cleaning up this spring after a rash of graffiti perpetuated by a tagger or taggers who identify themselves as “Screw” hit the Northeast hard. That bout of graffiti included a large tag in the Budd Park pool, as well as stop signs and businesses throughout the community.

“It’s frustrating for me and my staff, especially the staff that has to go out and clean it up. That money could have gone into something positive,” said Cummings. “It’s frustrating because of the waste of resources that we have to use.”

Parks and Recreation isn’t the only entity expending dollars on graffiti removal. Leslie Caplan, President of the Scarritt Renaissance Neighborhood Association, estimates that they have committed nearly $1,000 in grant resources to the removal of graffiti in the community.

“We got a grant, and we bought some graffiti wipes and some liquid stuff that you can put in a power washer,” said Caplan. “We bought white paint and rollers, and stuff like that. We just made it available to the neighborhood.”

Caplan and the association thought the problem was more or less resolved after the issues this spring, and she admits a growing sense of frustration now that graffiti is once again popping up throughout the area. She also bristles at the notion that the vandals responsible could be considered graffiti ‘artists.’ Real artists, she contends, provide value to the community.

“They are not artists at all. For anybody to call them that or think that, they’re just fooling themselves. What do real artists think about people who scratch their name on a building?” asked Caplan. “This kind of has hit a nerve, because we thought we were kind of through with that.”

KCPD Community Information Officer (CIO) Greg Smith has also seen his share of frustrations related to graffiti. He’s well aware of the work of ‘Screw,’ but also acknowledges that there’s little the department can do without catching the individual in the act.

“With Screw, we possibly know who it may be, but we don’t have enough evidence to say that it definitely is him,” said Smith. “It’s causing a lot of property damage, and we’re just trying to get a grip on him. It’s just hard. As far as the community; just be vigilant and report it.”

Smith noted that there are some specific steps that concerned community members can take in order to help KCPD officers catch a tagger red-handed. First off, Smith suggest calling both the police and the Parks Department whenever an incident is first spotted. Ideally, he added, observant residents could help by providing descriptions of the people or vehicles involved in the tagging.

“I would call 911 and the Parks Department even with vehicle descriptions, and stuff like that,” said Smith. “If we can get pictures of people, license plates; that would be the best thing to do.”

Smith is clear that spray-painting graffiti on public property is a crime, and that it will be treated as such. He also said that he and others at the KCPD are wary of more taggings being committed this summer, especially while public schools are out of session.

“Everything spikes during the summer. Kids are out of school, kids don’t have enough things to keep them occupied. They get into bad behavior with other kids,” said Smith. “In the summer time, crime does spike. A lot of our kids are committing these crimes.”

Cummings and Caplan are also well aware that tagging could become even more prevalent before it subsides. Cummings said that if he could meet face-to-face with vandals like ‘Screw,’ he would try to appeal to their sense of community.

“I’d probably say that the area that you’re defacing is in a place where you live,” said Cummings. “You’re disrupting the everyday life of every other person who lives in the Northeast.”

Caplan said if she was afforded a meeting with Screw or others who would deface public and private property, she would remind them of the extraordinary work that the neighborhood association and others have put in to turn Kessler Park into a true community gathering place. She proposed a steady regiment of community service when and if the vandals are caught, and asked taggers from throughout the area to consider those who are affected by their actions.

“People are just trying to pay their bills and put food on the table. Instead of doing that, they have to deal with this,” said Caplan.”I would just try to help them understand the point of view from someone else’s side of the table.”