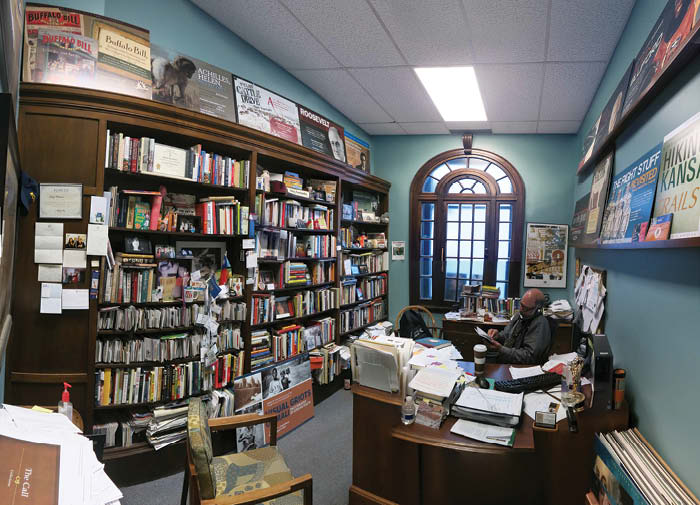 Books a million. Books that once occupied Fortunato’s office either went home with him or were donated to the Friends of the Kansas City Public Library for resale. Submitted Photo

KANSAS CITY, Missouri — For the past nine years, Henry Fortunato has been the face of the Kansas City Library.

As the director of public affairs, his primary responsibilities for developing, orchestrating, and executing adult programming, marketing, print publications, media relations, community affairs, online communications, social media, and exhibits. Not to mention the numerous successful ongoing speakers series; orchestrated efforts that led to programming partnerships with more than 100 Kansas City-area organizations; and obtained more than a dozen programming grants from the Kaufmann Foundation, the American Library Association, the National Endowment for the Humanities, the National Endowment for the Arts, and other foundations and donors.

Early on in his professional career, Fortunato was an editor for a business oriented magazine in Washington D.C. He said he took the knowledge from that experience and applied it to his role at the library, which he claimed wasn’t that different.

“Several months into my role at the library, I realized it was my responsibility to create programs that would bring people in and make the library a vital component to life in Kansas City. My duties as director weren’t much different than searching for stories for the magazine. So it’s been a magazine editor’s approach.”

There were programs and series when he joined the library, but he said they weren’t as organized as they are now. In the beginning, he was focused on coming up with interesting events and speakers who would draw a crowd. Then, as time went by, Henry and his department honed everything and sharpened their skills.

“That lead to the creation of series, ongoing products the public could get behind,” Fortunato said. “And over time, the library was able to develop different programs for different cultures of people.”

One example he gave was back in 2012, and with the assistance of the Truman Library, the Kansas City Library presented the Hail to the Chiefs series on the American Presidency. That spawned a series on First Ladies and the Supreme Court Justices.

Having grown up and lived on the east coast for most of his life, Fortunato claims he came upon the role with the library by happenstance. He also never thought he’d have three kids and live in Kansas, either. Prior to joining the library, Fortunato formed his own marketing firm in Washington D.C., then joined a company in Overland Park as a consultant and later as vice president, which brought him out to Kansas City. When that didn’t pan out, he went back to school where he served as the creator and project director/editor-in-chief of two public history initiatives at the University of Kansas and also received his master of arts in American history.

“Then through people, [Executive Director, R.] Crosby Kemper III, and I were introduced to each other and you can tell immediately that we were meant for each other,” Fortunato said. “He said we’ve got funding and a need to make the Kansas City Library the center for civic engagement and public discourse and we want to do it through programming. And we have. So it’s time to declare victory and do something else.”

In 2014, Henry made headlines for hiking 500 miles across Kansas. He wants to utilize his love of walking on his next adventure. He wants to take the love for walking and exploring and create something everyone can enjoy. He has a vision which combines all the things he’s learned in his professional career — public history, presentation, use of graduate students, humanities, and traveling exhibits — to enhance the walking and hiking trail experience in the greater Kansas City area by creating well designed interpretive panels that tell you what you’re walking through, what you see, the history of area, what happened here.

“On my walks around the Midwest, I’ve been to a lot of small towns and small museums and they all have great stuff, but it’s not being brought to a broader audience,” Fortunato said. “And I think I know how to do that. My focus is going to be relentlessly local.”

With too many people to thank and acknowledge, — although he noted the library staff was the best staff he’s ever worked with — Henry wanted to say all of these things he’s been able to do with programming would not have been possible without the, “extremely generous support of the Kauffman Foundation.” He said the foundation has contributed millions of dollars to the library, much of which has been used to develop the programs he spoke of fondly.

“Without that private money, this would not have been possible,” Fortunato said. “They gave us several blanket grants and they encouraged us to be entrepreneurial with our programming, which meant we were able to take risks, fail and take many small bets. If it worked, great, let’s see how we can expand on that. If it didn’t work, we looked at what went wrong. The freedom to fail is so important because you’re going to make mistakes. So the Kauffman Foundation’s extraordinary support allowed us to eventually create what we have right now which is one of the best programming and promotions machines in greater Kansas City.”