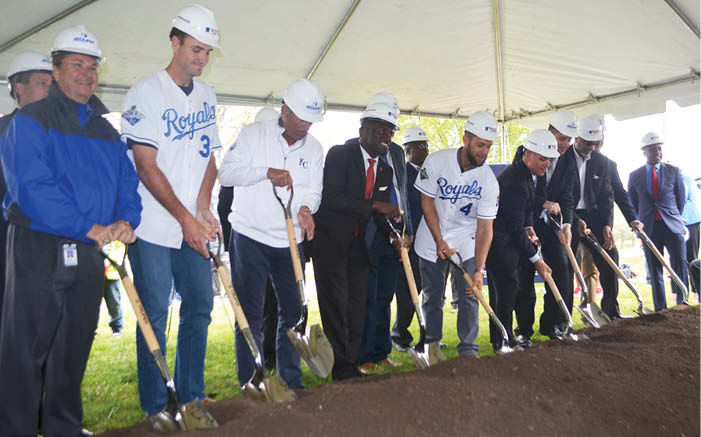 Kansas City politicians, dignitaries, and even some Royals baseball players came to Parade Park on Wednesday, April 20, for the official groundbreaking ceremony of the Kansas City Urban Youth Academy, a new baseball facility to be located near the 18th and Vine district at Parade Park. The $14 million project – the result of partnership between the State of Missouri, the City of Kansas City, the Kansas City Royals, and Major League Baseball, among others – will feature three brand new baseball fields, a softball field, and in the project’s second phase, an indoor training facility.

“As Mayor, I can’t think of a better project than this one. This is a no-lose project,” said Kansas City Mayor Sly James. “It is not lost on me that 100 yards that way is the Negro Leagues Museum, where the Negro Leagues was started. Now we’re bringing baseball right back to the doorstep of where it all started.”

Barring inclement weather, mobilization for the new project is scheduled to begin this week; site clearing is scheduled for May 11; site excavation is set to begin on May 16; turf for the fields is planned for installation by mid-to-late July; and the completion of the first phase of the project is set for November of 2016. Phase I of the project also includes relocated basketball courts, renovated and relocated tennis courts, and a relocated playground near the Gregg Klice Community Center.

Royals general manager Dayton Moore spoke to the importance of the facility, as well as the tremendous effort that still needs to go into making the vision of the KC Urban Youth Academy into a reality. is going to be special, there’s no doubt about it. But the truth of the matter is it’s going to be a lot of hard work and a lot of dedication,” said Moore. “The work is going to be challenging. It’s ultimately going to be a great journey that we’re going to put our heart and soul in to make work.”

James further noted the power that productive, engaging youth activities can have on a community.

“We know from our summer programming that when our kids are involved and engaged in non-threatening, safe activities, victimization of youth and crime committed by youth go down by 18%,” said James.

3rd District Councilman Jermaine Reed invoked the spirit of the Kansas City Monarchs, listing off the great players who once plied their craft just a short walk from where the Kansas City Urban Youth Academy will one day stand.

“This location is just a few blocks from the old Monarchs’ Municipal Stadium,” said Reed. “I think about some of those great players, like Jackie Robinson and Buck O’Neil, Satchel Paige, Ernie Banks, and some of those others who really played and perfected their game right here on those fields.”