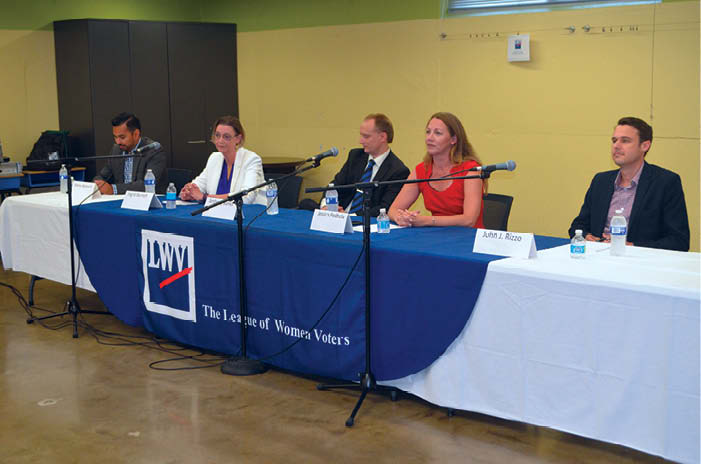 Candidates. Political hopefuls for Senate District 11 and House District 19 gathered at SVN last Thursday for a Candidate Forum hosted in concert by the League of Women Voters and the Northeast Chamber of Commerce. Paul Thompson

KANSAS CITY, Missouri – The first step towards a new District 11 State Senator and District 19 State Representative were taken on Thursday, June 23, as five hopefuls convened at Scuola Vita Nuova in the Historic Northeast for the first Candidate Forum of the campaign season.

The League of Women Voters and the Northeast Chamber of Commerce partnered to host District 11 Senate candidates John Rizzo, Jessica Podhola, and Anthony Banks, who are vying for the Democratic nomination for the Missouri Senate seat left vacant when former State Senator Paul LeVota resigned amid a sexual misconduct scandal last summer. In the District 19 State Representative race, Manny Abarca and Ingrid Burnett are competing for the seat previously occupied by District 11 Senate hopeful Rizzo. Republican District 11 candidate Brent Thurston Lasater did not attend, nor did District 11 Democratic hopeful Mary Catherine DiCarlo. There is no Republican candidate running for the District 19 House seat.

The slate of Democratic candidates found plenty of common ground on the evening. On gun control, each candidate came out strongly against the same-day purchase of assault rifles. While Rizzo stood firmly behind responsible gun ownership, he agreed that the Missouri General Assembly has gone too far with legislation, making the bar for gun ownership too low. Podhola stood against constitutional carry, while Abarca called for politicians to put people first. Burnett prioritized regulations against gun show purchases.

“Closing the gun show loop needs to happen,” said Burnett. “People shouldn’t be allowed to just go into a gun show and purchase an assault rifle.”

The candidates similarly found common ground on gay rights, the expansion of Medicaid, and abortion. The consensus opinion on gay rights was that measures which would allow business owners the right to deny services based on sexual orientation have no place in politics. No candidate came out stronger against the religious freedom measures than Banks.

“I think it should be called the bigot freedom act. I think it’s ridiculous,” said Banks. “If you’re an open business to the public, then you serve the public. If you don’t want to do that, close your business.”

Abarca promised to fight for LGBT rights if he is elected to the Missouri House of Representatives.

“I’m not going to be ashamed of the people who live with us. I’m willing to stand up and protect everyone,” Abarca said. “We need to stop this level of hate, because it’s not doing anything but tearing us apart.”

On the expansion of Medicaid, the candidates agreed that Missouri needs to do all it can to provide health services to as many people as possible.

Podhola relayed a personal story while describing her support for expanding Medicaid. In fact, she acknowledged that she was without insurance during her most recent pregnancy.

“I had to find a doctor who would take cash, because my family made $52.50 per month too much to qualify for Medicaid,” said Podhola. “No family should have to think about whether or not they can pay their medical bill.”

In regards to abortion and women’s rights, the candidates concluded that women should make decisions about their own bodies with the aid of a doctor, and not the Missouri Legislature.

“I’m Catholic. Born Catholic, raised Catholic,” said Abarca. “Those are decisions that need to be made between the doctor, women, and that’s it. We need to get over this and talk about the issues that actually matter.”

The candidates did have some disagreements, though. On the issue of marijuana, most of the candidates agreed that there were circumstances where it should be legal for medical use. Anthony Banks, however, argued for legalizing marijuana for recreational use as well, citing a potential influx of tax dollars as the main reason.

“I am 100% in favor of legalizing it across the board for medical use and beyond,” said Banks. “It could create $300 million in taxes per year.”

Podhola, on the other hand, was concerned that going beyond legalization for medical uses could send the wrong message.

“What I don’t want to see is Missouri becoming like California,” said Podhola. “But I have yet to meet a politician that doesn’t like the idea of that tax revenue coming into the state.”

On public education, Rizzo espoused the need to stop giving tax breaks to the uber-wealthy and to start fully funding the education formula in the state. Rizzo warned that businesses could start looking away from Missouri if the public education system is allowed to further deteriorate.

“When it comes to education, the first thing people look at when they start businesses are workforce training and the education system,” Rizzo. “We have got to have the best schools possible.”

Burnett called out the Jefferson City shell game, pointing out that casino revenues were supposed to go towards public education. Burnett also said that a strong public education system is necessary in order for private schools to flourish.

“You can’t have a strong private and Catholic system in a public school district that’s underperforming,” Burnett said. “It doesn’t attract the population that will support that.”

The candidates remained cordial for the bulk of the evening, although Burnett did manage a dig against District 19 opponent Abarca during her closing remarks. Burnett called out Abarca for leveraging his connections as a staffer for Congressman Emanuel Cleaver, and accused him of moving to the Northeast as part of a political blueprint laid out for him by the city’s Black Caucus. Because Abarca had already made his own closing statements, he wasn’t afforded an opportunity to respond.

Rizzo used the evening’s final remarks to warn voters that the Missouri State Senate is no place for a politician to cut his or her teeth.