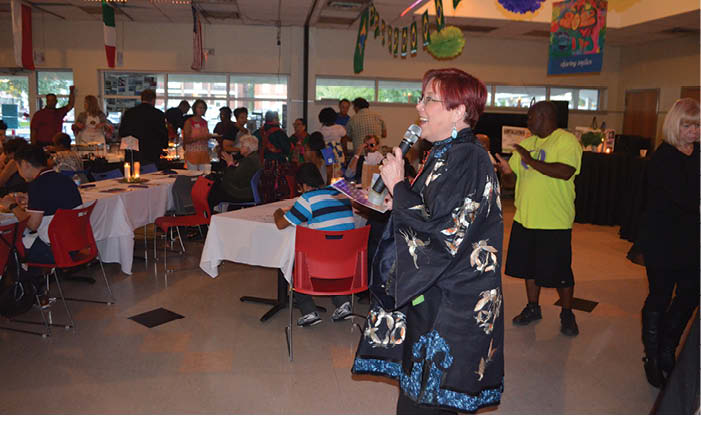 Taste and Tour. Northeast Chamber of Commerce President Bobbi Baker-Hughes ramps up the festive atmosphere at the ‘International Taste and Tour.’ Paul Thompson

KANSAS CITY, Missouri – The 5th annual Northeast Kansas City ‘International Taste and Tour’ event was held on Saturday, September 10, as more than 200 attendees enjoyed the sights, sounds, and flavors of the international community.

The event, held at Don Bosco Center in Columbus Park, included dinner provided by a selection of 17 of the area’s best international restaurants, a variety of international music and dancing, and guided tours of the Historic Northeast. Northeast Chamber of Commerce President Bobbi Baker-Hughes said that the popular chamber event continues to improve as the years go on.

“We had 202 attendees, and that did not include our dancers and our vendors,” said Baker-Hughes. “That said, I would say we had closer to 260 folks. It was a very good crowd.”

In a surprising twist, a live auction was hosted during the event by none other than KCMO 710 AM radio host Rob Carson. Carson recently drew the ire of Northeast residents when, during an on-air discussion, he seemed to encourage his listeners to illegally dump trash along Cliff Drive. The comments created a firestorm on social media, and led many residents of the Historic Northeast to flood the station with calls and emails demanding an apology. Baker-Hughes called, too, asking Carson to develop a better understanding of the community.

“He wasn’t aware of how protective we are of our neighbors and the community as a whole,” said Baker-Hughes.

She quickly received a reply from Carson, who went on to ask how he might be able to get involved with the community. They eventually steered the conversation to the ‘International Taste and Tour.’ A noted foodie, Carson offered to create a meal as one of the event’s auction items, and Baker-Hughes took him up on the offer.

“The Inn at 425 offered their kitchen and dining area for him to be able to create a meal for a party of six,” she said. “We ended up selling two of them.”

Carson also served as the evening’s auctioneer, and even took one of the guided tours of the Historic Northeast.

In addition to the meals at the Inn at 425, other auction items included tickets to upcoming Royals games, a trip to the Lake of the Ozarks, gift certificates to featured restaurants, and an original art board painted by Rebecca Koop of Northeast Arts KC. The board, which Koop dubbed ‘The Green Man,’ was one of the public art pieces that was thought to be lost earlier this year after the building they were displayed upon was demolished. The art boards were later recovered and refurbished. Attendee Winifred Jamieson purchased ‘The Green Man’ for $110 during the auction.

It has sentimental value, because I remember when they put it in,” said Jamieson.

Baker-Hughes noted that the Chamber of Commerce was still in ‘recovery-mode’ following the event, but she did tease that the ‘International Taste and Tour’ could be expanding ahead of next year’s event.

“Every year it has climbed up a bit, and this year proved to be in the same upward climbing motion,” said Baker-Hughes. “We may very well be looking at expanding even more.” 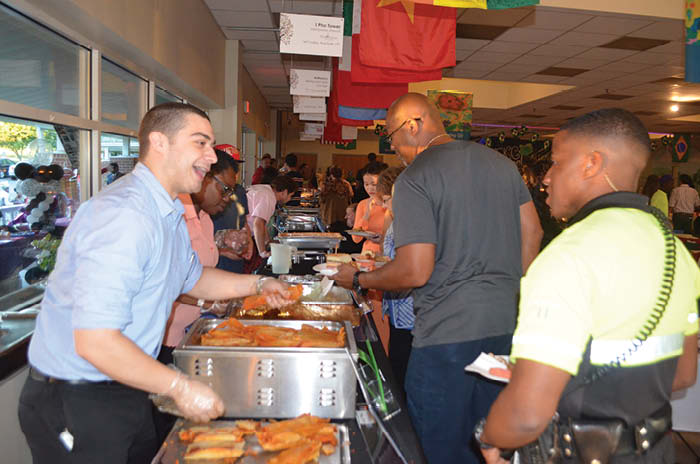 Taste. A total of 17 restaurants provided food during the annual event, which was in its fifth year. Paul Thompson 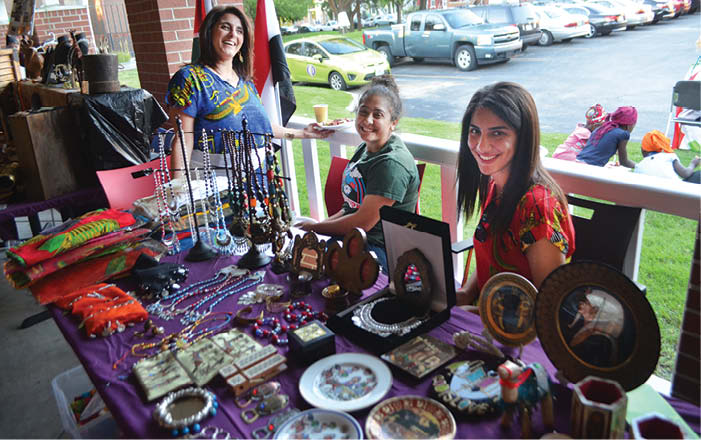 Wares. A group of area merchants were invited to sell their products as part of the International Taste and Tour’s international marketplace. Paul Thompson