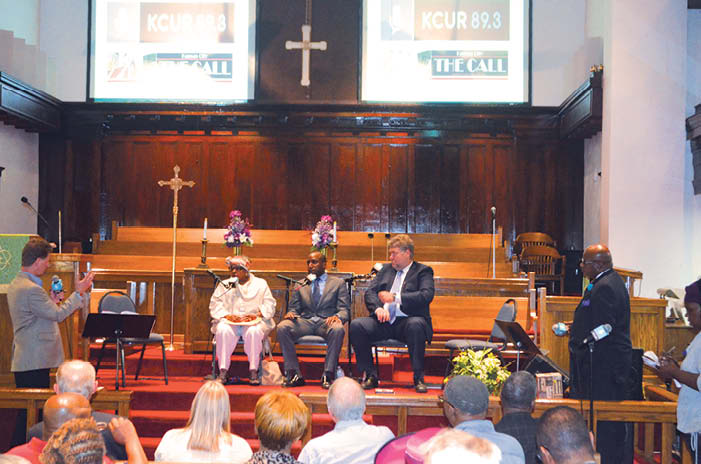 Forum. KCMO officials met with members of the public regarding the 18th and Vine district redevelopment plan on June 29 at Centennial United Methodist. Paul Thompson

KANSAS CITY, Missouri – Once again, a decision about a multi-million dollar redevelopment proposal for the 18th and Vine district will have to wait for another day – this time it’s Thursday, July 14.

On Thursday, July 7, 3rd District Councilman Jermaine Reed had planned to hold a vote on the long-gestating project, which had previously reached a June 8 stalemate in the joint Planning, Zoning, Economic Development and Finance committee. After that meeting, Reed pulled the ordinance he sponsored out of committee, hoping he could coax a favorable vote on the project from the full City Council.

“We’re now 42 days since this item was referred to joint committee on May 26,” said Reed during the July 7 legislative session. “Therefore on June 16, Mr. Mayor and members of the council, I exercised my privilege as the ordinance sponsor in requesting that this ordinance be moved from the joint committee and placed before the full council for consideration today.”

In order to make the proposal more palatable, the council has proposed several adjustments to the initial plan: appropriating the bond funds for only Phase 1 to reduce current funding obligations from $27.6 million to about $12 million; providing 1/3 of the funds using 3rd District in-district PIAC allocations; and authorizing the city manager to pursue the creation of a CID that would impose a 1% sales tax used to make bond payments.

So far, though, the plan has had trouble gaining a foothold with the Kansas City Council, and perhaps more surprisingly, with community stakeholders in and around the 18th and Vine district. Cracks in support for the $27.6 million proposal emerged at a public forum held on Wednesday, June 29 at Centennial United Methodist Church, located at 18th and Woodland.

KCUR and The Call partnered to host the public forum, during which the organizations invited public comment regarding the $27.6 million 18th and Vine development, the Kansas City MLB Urban Youth Academy, and how both developments could threaten longtime residents of the Parade Park apartment complex located due north of the district.

Attendees didn’t hold back during the two-hour forum, airing grievances both new and old. The public relayed a general sense of mistrust towards City Hall involvement in the area, at times even questioning the largely privately-financed Urban Youth Academy. The visceral reactions from the public were eye-opening to 3rd District City Councilman Lucas, who sat on the panel that evening.

Of particular concern to Lucas was the idea that long-time disinvestment in the area has created an overwhelming cynicism among Kansas City residents.

“One of the most interesting parts is how much everyone lacks faith in their institutions; that concerns me greatly.” said Lucas. “There is a big problem in the fact that no one seems to trust what’s going on. It’s literally every part of the city. If we don’t address it, then the city will become ungovernable.”

Forum attendees relayed great frustration, as well as calls for the public to have a greater role in developing a revitalization strategy at 18th and Vine. While Lucas acknowledged during the forum that the plan wasn’t perfect as presently constructed, he added that the infusion of funds in the area is an important step that would bring jobs to the district. To Lucas, the price tag is a worthy investment of city dollars.

“To really rebuild and restore a neighborhood where we saw disinvestment for decades is going to cost real money,” said Lucas. “We incentivize almost every project that’s going on downtown. Nobody ever asks, ‘When is downtown done?”

Still, the public appeared skeptical with the city’s expanded role in the entertainment district under the proposed revitalization plan. The full City Council seemed similarly reticent to back the plan in its original form on July 7, as council members grappled to find a compromise that could establish a consensus. The decision to withhold a vote until at least July 14 echoed the result of the June 8 joint committee meeting, which followed several hours of testimony with a split vote.

A vote will now have to wait until at least July 14, as the council looks for ways to make the revitalization plan amenable to a majority of the divided council.